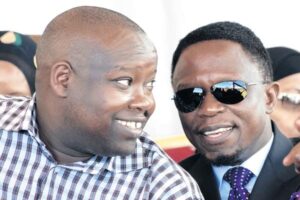 Former Prime Minister Raila Odinga on Monday started meeting rebel MPs in his party in an attempt to end wrangles that threaten to tear ODM apart.

Mr Odinga met Budalang’i MP Ababu Namwamba at his Capitol Hill office in Upper Hill, Nairobi, for three hours in the morning, just a day after he denied — through his spokesman, Mr Dennis Onyango — scheduling meetings with party rebels.

Even as he was extending an olive branch to dissenting MPs, his allies in the party traded bitter accusations with embattled executive director Magerer Lang’at over the February 28 elections.

Mr Lang’at was scheduled to appear before a party disciplinary committee this morning but on Monday he told the Nation that he will not appear because he has allegedly not been invited.

Neither Mr Odinga nor his spokesman, Mr Onyango, could be reached to comment on the apparent change of heart after saying on Sunday that the only meeting expected to be held by ODM was the disciplinary session.

Party insiders who spoke to the Nation played down the talks. They said dissent by Mr Namwamba and other MPs, while serious, was not an indication that ODM was falling apart.

A photo posted on Twitter by Machakos Governor Alfred Mutua last Thursday sparked speculation in Cord that Mr Namwamba, Mr Lang’at, Dr Mutua and Kilifi North MP Gideon Mung’aro were working on a new political alliance in the face of wrangles in their parties.

Reports on Sunday claimed that Mr Odinga and his Cord co-leader, Mr Kalonzo Musyoka, had called the four for talks this week.

On Monday, sources said Mr Odinga called Mr Namwamba to his Capitol Hill office for a meeting to discuss the issues at the centre of the wrangles in ODM.

It is understood that during the meeting, to which only one media house was invited to photograph the Budalang’i MP as he walked out, the ODM leader emphasised the need to keep the party intact and expressed his desire to solve the wrangles which have persisted since the botched Kasarani Stadium party elections.

Contacted for comment, Mr Namwamba said: “I am not in the habit of discussing private meetings in the media. If there is anyone who saw, they can tell you.”

Sources privy to the meeting said Mr Odinga urged Mr Namwamba to remain in ODM despite the leadership wrangles.

Mr Namwamba vied for the position of secretary-general’s in a line-up that had also included governors Hassan Joho (Mombasa) and Josephat Nanok (Turkana).

The elections aborted after hired thugs, known as Men in Black, disrupted the event, breaking ballot boxes and scattering records.

RETURN TO THE FOLD

Eight months later, it is understood that Mr Namwamba has expressed the desire to give up on the position and sources said Mr Odinga on Monday urged his one-time staunch ally not to do that but consider the party’s proposals on how to end the leadership dispute.

The sources said Mr Odinga asked the Budalang’i MP to talk to his colleagues — Mr Mung’aro and Mr Lang’at — to return to the fold.

As the ODM leader was meeting Mr Namwamba, his allies opened a new battle front, releasing a document containing a raft of allegations they want Mr Lang’at to respond to when he appears before the disciplinary committee on Tuesday.

The list detailed how Mr Lang’at allegedly tried to rig the elections in favour of the Namwamba camp and how the names of top party officials were missing from the list of delegates.

Among those whose names were allegedly missing included outspoken Tigania East MP Mpuru Aburi, Eldoret politician Kipkorir arap Menjo, former nominated MP Tabitha Seii and one Olga Karani, a candidate for one of the seats.

“Kipkorir arap Menjo, a strong ODM voice in Rift Valley, declined to show up at Kasarani after the list was altered. Earlier, Tabitha Seii, who had also found her name removed only found her way back after demanding audience with Raila,” the charges said.

But in a swift rejoinder, Mr Lang’at denied any wrongdoing, saying neither Mr Menjo nor Ms Seii were ODM members.

“The party leaders instructed us to include him in the list. He was in Narc Kenya even by January this year. As for Seii, she was in Wiper until January but we were instructed to include her name.

“Olga Karani was a URP member but Raila gave her the green light to contest. We never pushed for anyone and we have the evidence,” he said by phone.