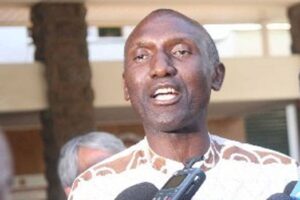 One of the country’s top neurosurgeons was injured in a gun battle with gangsters who attacked him in Karen on Sunday.

Dr Oluoch Olunya was accosted by the three gangsters after his car stalled on Windy Ridge Road in Karen at around 4 pm.

Dr Olunya led the medical team that operated on Cord leader Raila Odinga in June 2010, when he was admitted at Nairobi Hospital to remove fluid from his brain.

“He was driving to visit a friend when he hit a bump and the car broke down. He stopped and opened the bonnet when a white vehicle, which seemed to have been trailing him arrived. Three gangsters, one armed with a pistol, attacked him and a shootout ensued,” police said. The doctor is a licensed firearm holder.

He was shot at the back and robbed of two mobile phones, and a wallet. The doctor was rushed to Nairobi Hospital, which is also his workplace. Police who visited the scene of crime found 12 spent cartridges.

Police said officers on patrol “came across three robbers who had just attacked Alphonse Otieno and robbed him of a mobile phone and Sh 5,000”. They fled from the officers before one was fatally shot.

The others escaped into a river and swam across to the other side. A homemade gun, a mobile phone and a sword were recovered.