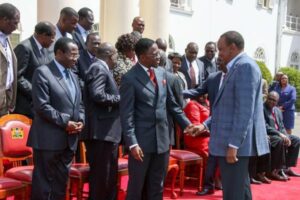 State House said the meeting focused on the revival of Mumias Sugar Company where the government will release Sh1 billion to the firm.

Uhuru warned against politicisation of the Mumias Sugar revival and said the release of Sh1 billion towards the recovery of the company is pegged on the government’s commitment to support cane farmers in the Western region.

“We are keen on reviving the sugar company because we know it will benefit farmers. This has nothing to do with politics,” he said.

The June 19 Raila meeting was to chart a course for the region.

VIDEO: Uhuru and Raila party the night away in a reggae…

Uhuru and Raila to speak at an international luncheon in…

“These two industries form the financial backbone of the region and it was unanimously agreed that no efforts are to be spared in ensuring their survival,” he said on Friday.