PHOTOS: FLASHY BACHELOR TIES THE KNOT IN WEDDING OF THE YEAR 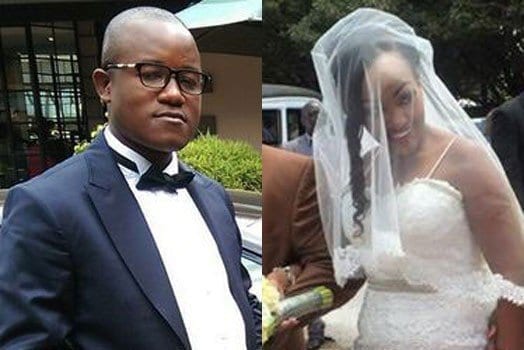 Nairobi’s most eligible bachelor Jared Otieno on Saturday solemnized his union with his sweetheart Kendi Mwiti in what will probably pass as Kenya’s wedding of the year 2015.

Just like he did during the dowry payment two months ago, the flashy bachelor spared no expenses when he tied the knot with his erstwhile fiancée in an invites only ceremony at Windsor Hotel and thereafter a reception at Safari Park Hotel.

The wedding was practically a fairy tale story with the bride being chauffeured to the venue of the ceremony on a horse drawn chariot complete with flower petals.

For the few privileged guests a gold embroidered invite card instructed them to dress formal and elegant. The card also stated in bold letters that no children would be allowed at the ceremony.

The long wedding motorcade, which included top of the range fuel guzzlers, snaked its way along the Thika Superhighway to the venue of the ceremony completed with police outriders.

The convoy consisted of at two Porsches, a limousine and three vintage Rolls Royces.

The person charged with carrying the couple’s rings was none other than their son Taraji Neymar Otieno, who they described as “our little munchkin” in a gold-coloured card for guests.

When the Nairobi News team arrived at Safari Park at 4.15pm, staff of the hotel were busy putting things in order for the reception that was to start at 5.30pm.

One of the waiters said the Otienos had brought in their own tables, chairs and tents — all of which conformed to the white-and-gold colour scheme. The waiter said the reception party would accommodate 1,200 guests

The emcees of the day were Big Ted and MC Jesse, and the wedding programme was scheduled to start at 10am Saturday and end at daybreak Sunday.

Big whiskey brands were on offer for the distinguished guests at the Safari Park reception, although the programme said alcohol would only be served after 9pm — after speeches, cake cutting and a dance by the Otienos.

According to the programme, Citizen TV news host Kanze Dena was to coordinate the recitation of a Kiswahili poem to the couple by a guest artiste. Benga sensation Onyango Alemo was also scheduled to perform.

When asked to share his feelings as the photo shoot went on, Mr Otieno, calmly toldNairobi News that the event was not open to the media.

In May the groom spent Sh 15 million in a pre-wedding party in his home town of Ndhiwa, followed by a well-choreographed dowry payment ceremony three months later at his bride’s home in Meru.

The dowry payment ceremony was an equally flamboyant affair that saw the groom and his entourage arriving in Meru town in choppers and fuel guzzling machines.

While speaking during the occasion Senator Murungi encouraged inter-ethnic marriages.

“We will lose all our girls to the Luos if we do not treat them the way Luo men do, my daughter is also married in Nyanza” he said at the time amid laughter.

The bride maids in their resplendent aqua outfit. PHOTO | COURTESY

Photos: Flashy Bachelor Ties The Knot In Wedding Of The Year