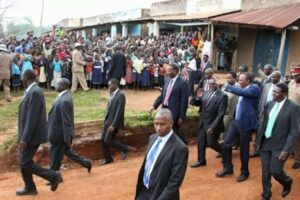 The President and the DP visited Bungoma county, viewed as an Opposition stronghold, with several goodies on Saturday.

Uhuru accused the opposition of continuously attacking the KDF forces in Somalia saying it showed lack of patriotism.

Amid claims of a sugar deal with Uganda, Cord leader Raila Odinga claimed the KDF smuggles most of the product in shops in through the Port of Kismayo.

“Tell them [the Oppositon] to stop their empty rhetoric and leave us to develop [the country] for the people,” Uhuru said in Sirisia.

Uhuru said Lwakhakha border point will open up and strengthen trade among Kenya, Uganda and Tanzania.

He said it was agreed that Uganda will build a road from Mbale to Kenya’s border once the point is opened and the construction of Chwele-Lwakhakha road completed.

On Uhuru’s schedule for Monday is the groundbreaking for Muruny dam, the official opening of the KMTC and the commissioning of Limo Hospital road.

He is also expected to launch the Sabor-Iten-Tambach water project and the county works machinery.

Deputy President William Ruto said the Jubilee government is interested in service delivery, not public spats with the Opposition.

He said the administration is not worried about facing the Opposition in 2017 as it is “upbeat” about winning.