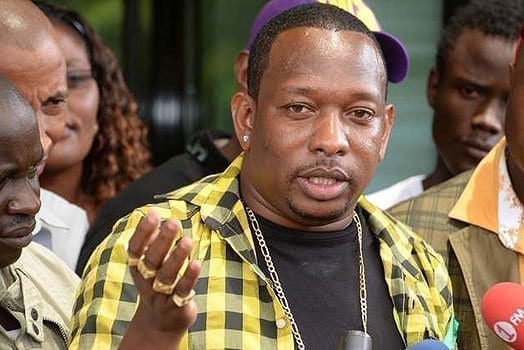 Nairobi Senator Mike Sonko has for the first time admitted to being polygamous.

The flamboyant senator replied to a fan’s comment on his official Facebook page stating that he only has two women.

Sonko had uploaded the video of a Nairobi man who was caught pants down which he captioned: “Do you think we should take our MPANGO WA KANDO to our matrimonial homes?”

The word ‘our’ in that statement prompted a fan, Victor Kaunyangi, to comment, “Let’s begin here, where do you usually take yours?”

Sonko went on to reply: “I only have 2 and each has her own house and I respect them a lot especially mama watoto.”

The remark attracted over 400 likes becoming the most liked comment on that thread.

Francis Kaparo’s Wife of 40 Yrs Says No to 2nd…

Sonko went on to ask the fan how many he has and to that Victor replied: “Your honesty makes you a good leader. Wengi wetu hapa hawawezi kubali hata wako na mama watoto.”

The senator has in the past revealed his wife Primrose as the biological mother of his third daughter.

Sonko has also fathered two other daughters with different women.

His first born, Saumu, who is a student leader at JKUAT Karen was born during the senator’s first marriage to his late wife and high school sweetheart Njeri Wangui whom he recently celebrated in a post.

The second daughter, Salma, was born out of a relationship with another woman. According to an emotional tribute posted by Salma on her Instagram account on December 1, 2015 her mother is also deceased now.

All the children, including the adopted Baby Satrin Osinya, currently live with Sonko’s wife Primrose.

Video:Sad story of Father, Mother and daughter’s body held in India over medical…

Wife-beating a source of pride, love for some in Mauritania