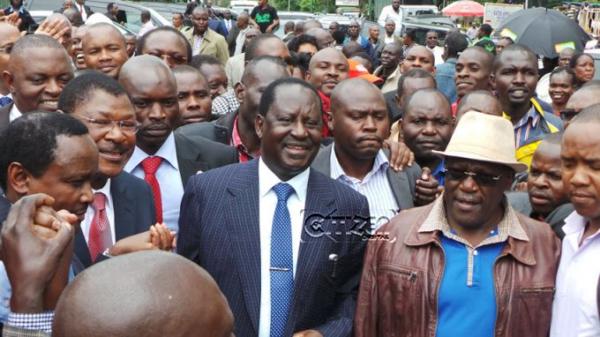 Former Prime Minister Raila Odinga has refuted claims that he is the automatic presidential flag bearer for the Coalition for Reforms and Democracy (CORD).

Raila claimed that any principal within CORD has the ability to be the coalition’s presidential candidate terming the ‘favourite’ tag as a creation of the media and Jubilee to drive a wedge within CORD.

He refuted claims of divisions in the coalition over who will be the flag bearer saying the coalition has agreed on the best way forward.

The ODM leader further stated that every leader within the coalition has the right to launch their presidential bid and gauge their popularity ahead of the 2017 elections adding that despite the parallel interests the country is intact.

Mr Odinga’s pronouncement made during an exclusive interview with Citizen TV’s Hussein Mohamed, was aimed at dispelling reports in the media of divisions within CORD over the presidential candidacy.

While ODM members have backed Raila for the 2017 presidency, Wiper and Ford Kenya have remained adamant that they would support their party leaders for the top seat.

Talks of disintegration within CORD were magnified last month after Raila skipped the launch of Moses Wetangula’s presidential bid at Muliro Gardens Grounds in Kakamega.

The launch was marred by incidences of chaos with youth clad in ODM t-shirts, linked to Kakamega Governor Wycliffe Oparanya, attempting to stop the event.

Oparanya’s aide Nabii Nabwera was arrested and arraigned in court in connection to the chaos.

Commenting on the issue in his first TV interview since it happen, Raila delinked ODM from the allegations saying the issue was not with Wetangula’s presidential bid launch but a battle of supremacy between Governor Oparanya and Kakamega Senator Bonny Khalwale who has announced interested in running for the governorship position in 2017.

“There were concerns within Oparanya’s camp that Khalwale would use the platform to launch his governorship bid and that caused a little bit of unrest,” he stated.

“We have spoken to CORD legislators to let democracy prevail and treat each other with respect and that is why there is calm within the coalition.”