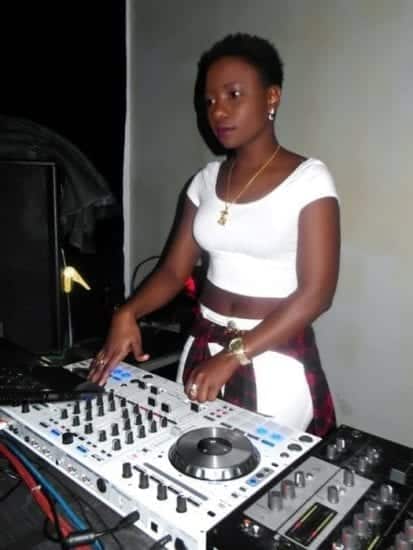 Kenya’s first female professional Dee Jay (DJ), Philly Ojala, stage name, Aisher Philly, has gained increasing prominence and popularity in entertainment scenes in Germany.
Philly’s trajectory as a dj, was not smooth sailing.  It initially started when she was a member of the school choir. Her singing talent while in the school choir impressed her teachers.  She was assigned duties as an entertainment prefect, which translated to a
love for music. She would listen and play music as much as time would permit.
She later started spinning at friend’s private birthday and house parties, using basic vinyl equipment. Nevertheless, the prospects of carving a niche in a male-dominated profession was out of her mind but nothing deterred her from taking the challenge head on.
It took less than a year before she found herself sharing the stage with long established DJs from diverse backgrounds.
Her dexterity with the digital controller deck, and ability to gauge rhythm, is always in synch with crowds. This made clubs and Afro party organizers take notice.
Early this year, Aisher stunned the public when she emerged the best African DJ in a recent audition, held in Frankfurt in February.  It was a competition in which she was up against seasoned DJs, mainly from West Africa with a jury composed of people from that part of the continent.
Paraphrasing Pierra Makena, a leading female DJ in Kenya in a recent TV interview “disc jockeying pays well and is no longer a profession one would say; I will be a DJ because I failed in school’. According to Pierra most of the DJs in Kenya today have university credentials and, Adrian Wanyama, a DJ and university student concurred.
Joining the league of the legendary Kenyan entertainers like Mohamed Heid, Rabba Johny and Thomas Masinde “DJ Bucheeezo” is not only seen by music lovers as a meteoric leap but even herself.
Without fear of contradiction, Aisher is probably the only Kenya female DJ in Europe,
and plans for her to share a stage in Germany, with Pierra, her role model, are ongoing and anxiously awaited.
By;
Mickie Ojijo
Frankfurt
KENYAN FEMALE DJ PHILLY OJALA TAKING GERMANY BY STORM

First ever Kenyan made ship unveiled in Mombasa

Somewhere between Right and Wrong: Why NASA’s David Ndii should Commit Suicide.