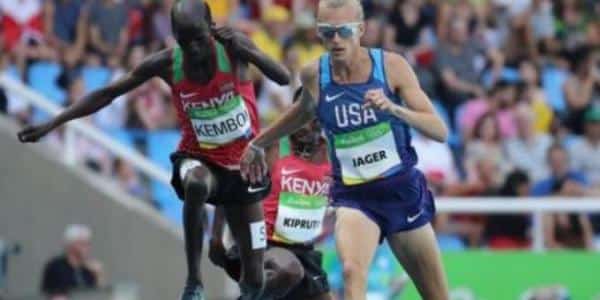 In the picture, Kemboi’s foot is seen a few centimetres off the track, a mistake that prompted his French counterpart, Mahiedine Mekhissi – who came in fourth – to appeal the veteran’s win.

Kemboi stepped outside the track just after clearing a water jump on the curved part before the home straight. Under race rules, runners cannot step off the inside edge of the track when running around bends.

Hours after the two-time Olympic champion was awarded the medal, he was disqualified over what was termed as lane infringement and Mekhissi promoted to third place.

The disqualification came after the steeplechase champion announced his retirement.

Kenyans on social media expressed varied reaction over Kemboi’s elimination with some offering encouraging messages while others pointing an accusing finger.

Kudos Ezekiel Kemboi ……wewe ni baba Yao .retire but I know you are not tired

Be cautious with the people you associate yourself http://with.Now you understand where Ezekiel Kemboi went wrong.

VIDEO:Drama as Motorist Refuses to Have His Car Towed