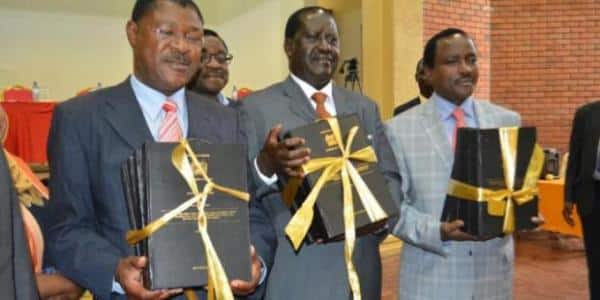 Kakamega Senator Bonny Khalwale has revealed plans by the Coalition for Reforms and Democracy (CORD) to re-introduce the Prime Minister position if the Opposition wins the upcoming General Election.

Addressing the press at Parliament buildings on Wednesday, the Ford-Kenya Deputy Party leader announced that the coalition would re-introduce the position to cater for the presidential aspirant who would come third during CORD’s nominations.

“The position of the CORD flag bearer and his running mate will only be available to two co-principals. FORD-Kenya, therefore, proposes that the coalition reserves a negotiated position within the CORD government for the third co-principal including his party’s share in all governments positions.

“This is to mean that if, for example, ODM was to miss out on the position of flag-bearer and running mate, the ODM leader will have a negotiated position reserved for him in the CORD government and his party shares in all government appointments,” Khalwale said.

The Senator disclosed that CORD was in talks with Amani National Congress (ANC) party leader Musalia Mudavadi, to join them ahead of the 2017 Elections.

The announcement comes barely a day after the Wiper Democratic Movement proposed to register CORD as a party so that all the three co-principals battle it out at the nomination level.

Is Matiangi the new prime Minister? Uhuru appoints him head…

Kenya fights off pain of isolation and cold war by Magufuli