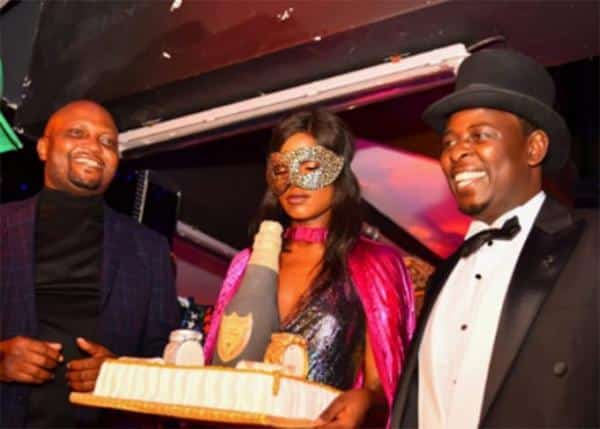 Philanthropist and businessman Gor Semelang’o reportedly spent Ksh2 million on his birthday party, which saw the society’s who’s who attend the event.

The Sunday, February 10 soiree took place at the high-end Golden Ice Bistro, which is housed at the Nextgen Mall on Mombasa Road, Nairobi.

The bash was attended by, among others, Blue Chip company CEOs, Members of Parliament, popular entertainers and corporate leaders, qualifying christening of the function as a “Big Boys” party.

“I wouldn’t want to reveal the total amount of money I spent in organising the event because that would be akin to bragging. You can, however, make your deductions from the types of drinks, food, cake and nature of people, who attended the event,” Mr Semelang’o told EDAILY.

The businessman says he, during the party, had a lengthy conversation with MP Moses Kuria on how the lawmaker can join ODM leader Raila Odinga in his [Odinga’s] quest of uniting Kenyans.

“Mr Kuria said he is ready to work with the former premier so as to continue integrating Kenya’s communities,” said Mr Semelang’o.

The party comes in tandem with his January, 2019 appointment as a Senior Advisor to the Board of Advisors of the Commonwealth Security Group.

In a letter of invitation sent to Mr Semelang’o, the Commonwealth Security Group said it had tapped Gor’s experience as a “businessman, philanthropist and foundation leader in Kenya and across East Africa”.

“As I turn a year older, I wish to give more to charity through my foundation called Black and White,” said Mr Semelang’o.

Creating Opportunities for Our People – Job Openings at Optiven Group