Raphael Obonyo, a young man from Korogocho was slums named one of the 2016 UN Persons of the Year, alongside Ambassador Tegla Lourupe, for his contribution to youth empowerment. The Kenyan who acts as a Global Young Diplomat and an adviser on the UN-Habitat’s Youth  Advisory Board is no stranger to global awards having received several throughout his career.

An advisor on many boards  including UNISDR’s Africa Youth Affairs, Raphael Obonyo has laboured in the slums not only to bring attention to the lives of those living in unfortunate conditions but also to develop the youth for a brighter future. Co-founder of the local radio station Koch FM, Raphael has set up various platforms too including Miss Koch. On viewing his website, it is evident the extent of his work in bringing to light the resilience of the human spirit and his tireless work in youth development. Awarded with the prize for UN Persons of The Year, Raphael Obonyo took to his Twitter account to share the news. Beaming with pride, he shared his speech with a roomful of diplomats and fellow nominees at the UN-Habitat Headquarters in Nairobi. 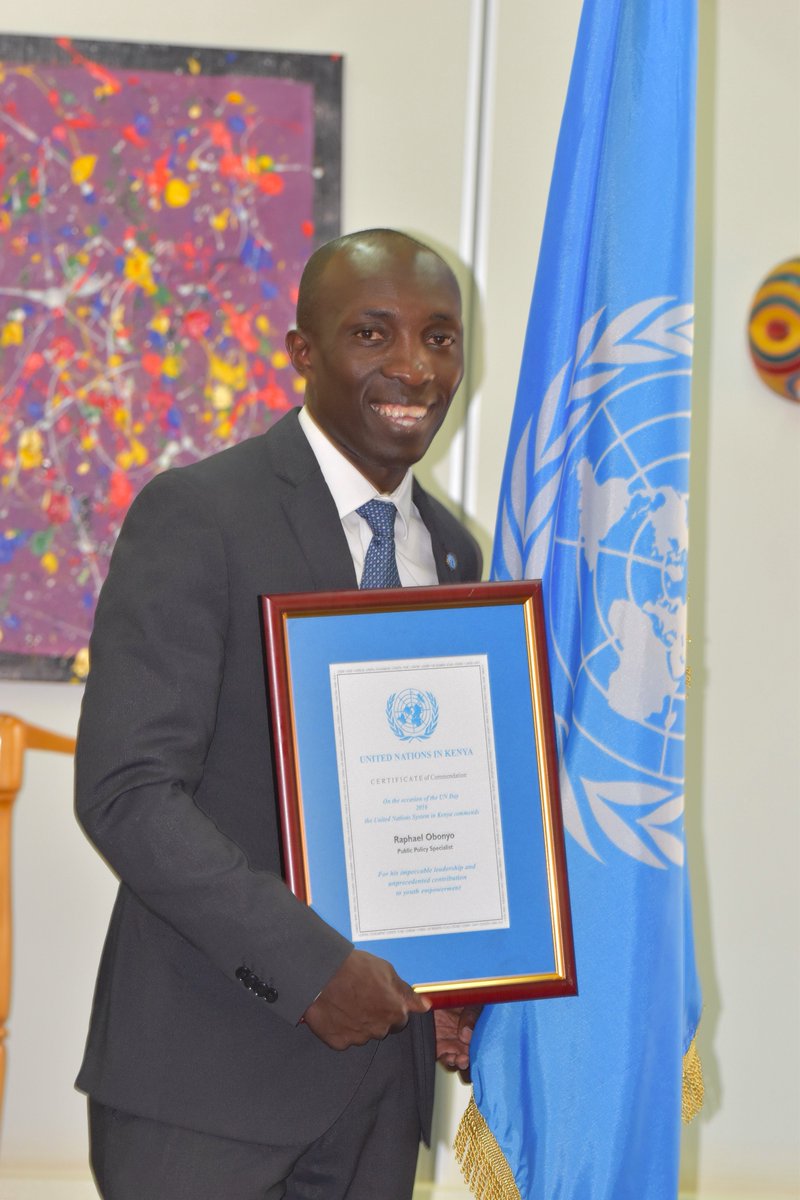 Honored to be recognized as one of the @UN Persons of the Year, for my contribution to #Youth #Empowerment #UNDay @UN@unhabitatyouth #Kenya

In his formal address at the United Nations offices in Nairobi,  Raphael a winner of the Africa’s Promising Leader Award 2014, shared an inspirational speech detailing what motivates him. He shared ” my strongest passion has always been to create opportunities for young men and women, to realise their full potential. I have co-founded a number of youth empowerment organisations and programs. This award is not only about the delight of youth achievements, but it is about the story of young people’s struggles for opportunities. The award is a clear signpost that Youth are the leaders of today, and not the future.This award shows that youth is not only about “lack”, but it is about “ potential” – vision and action for social progress and development.

He continued to give a heartfelt vote of thanks explaining,” this award affirms that youth are not only a population with problems, or pose problems. But youth are the solution, and that we have the power to solve problems in our communities, country, continent and the world. I’m grateful to the United Nations for their continued support to youth endeavours. Most important, I thank the UN-Habitat, the agency that gave me a rare opportunity to represent and serve the youth, as a member of the Youth Advisory Board, they set me on a remarkable journey. And to the people of my hometown Korogocho, I believe this award inspires them, as it affirms that life portends limitless possibilities and opportunities.”

Raphael also spoke to encourage the Kenyan Youth saying, ” And to the Kenyan youth, the award demonstrates our resilience, and speaks to our highest aspirations – that in the face of unimaginable difficulties, we can beat the odds, change the shape of history and create a better future for ourselves and for others. Indeed, a better world is possible if we take action. “