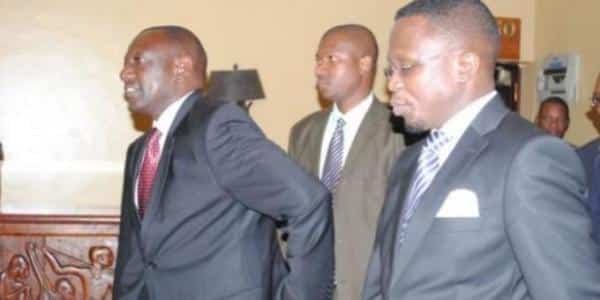 Deputy President William Ruto on Friday defended Budalangi Member of Parliament (MP) Ababu Namwamba against frequent attacks he has been receiving for ditching ODM, where he was the Secretary General.

Speaking during a fundraiser in Busia County, Ruto warned that Namwamba should not be victimised for his decision to quit the Orange party, since he was not the first leader to do so.

The DP gave examples of former Pentagon members who had ditched ODM including Narc leader Charity Ngilu, Joe Nyaga and himself, maintaining that the Budalangi MP was at liberty to make his own political decisions without being castigated.

“Other people are also leaving. Didn’t leaders in Pentagon quit? Ngilu left and so did Nyaga. Didn’t Ruto also leave? So why are people shouting about Ababu?” he posed.

At the same time, the Deputy President urged the Namwamba to speedily make up his mind, join the Jubilee Party and be part of the government after the 2017 election.

He rallied residents of the area which is an Opposition stronghold to support the government discouraging them from gambling with their vote as they did by backing CORD in the last polls.

“Last time you gambled and you can now see where you are. This time round I am not leaving you behind. Join us so that we form the government together,” he urged.

Ruto was on a tour of Western region where he attended several fundraisers in Busia and Kakamega counties in a bid to woo the region which has in the past been an Opposition backyard.

Gideon Moi to be DP in Nasa line-up