Stop getting worked up over drugs, Shahbal tells ‘crying’ Joho 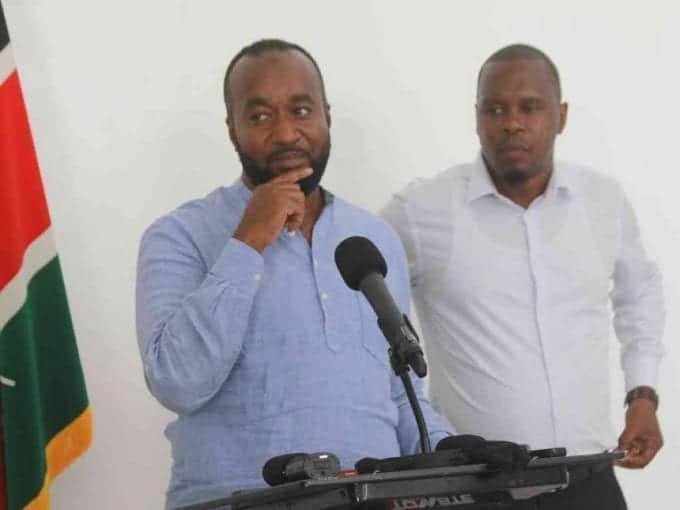 Shahbal, who is a Jubilee aspirant, told off Joho saying he should also be sincere about the war on drugs.

“Why is the Governor getting worked up yet nobody has accused him of dealing in drugs? Why is he getting so worked up? He should clean the city,” he said.

Baktash and Ibrahim Akasha, Vijay Goswami (Indian) and Hussein Shabakash (Pakistani) were extradited to the US where they will be tried for allegedly running a drug trafficking syndicate.

In an address to the media in Mombasa on Thursday, Shahbal asked the governor to stop turning the menace into a political matter.

“When a politician turns the whole drug thing into politics, it’s absurd. We have more than 96,000 drug addicts,” he said.

Shahbal said when he becomes the governor he will push the government to make drug trafficking a capital offence.

The politician claimed some 50-60 per cent drug dealers need to be wiped out.

“Our government has not given this enough attention because it is a coastal problem,” he admitted, but added that “Jubilee’s rule is not ending in August. It is going on up to 2022 so there is still time to clean this mess.”

He said a drug dealer cannot be arrested at 10pm on one day and released the next morning.

Joho reprimanded President Uhuru Kenyatta’s Jubilee administration over the war on drugs saying they should clean their house first.

He reiterated that he does not deal in drugs and said the government will not intimidate him.

“I am not aware that I am being probed for drugs. How do you give a bank robber notice? If you know barons why don’t you arrest them?” he posed.

President Uhuru Kenyatta talked tough against drug dealing during a visit to the Coast, when he said that his administration will eliminate barons.

But he has been criticised for reiterating his remarks over the years, while the illegal business carries on.

Word of the Day:Being a cheerful giver.