Ali Hassan Joho is the first governor of Mombasa County having successfully been elected in the hotly contested March 4th, 2013 polls. He is the immediate former Member of Parliament for Kisauni Constituency following the 2007 general election.

Ali Hassan Joho has risen politically from an amateur who once contested for the Kisauni member of parliament and lost in 2002, to a self-made politician who made his first appearance in the house of assembly in 2007, and now call shots both at the county government as a governor and at the national politics as the deputy party leader of Orange Democratic Movement (ODM).

Prior to becoming the governor, Ali Hassan Joho served as the Assistant Minister for Transport; as Deputy Chairman of the Foreign, Defense & Election Committee; as Library Committee Member of Transport, Housing & Public Works. He served as Kisauni Party Chairman for the Liberal Democratic Party between 2006 – 2007.

Hassan Joho is an influential serial entrepreneur who has successfully started, grown and managed various enterprises in diverse sectors ranging from environmental management, shipping and logistics to manufacturing and retail. As a business magnate and investor, he is the founder and pioneer of Prima Pest & Bins Limited, the first garbage collection company in Mombasa.

Ali Hassan Joho is also the founder of M-Tech Kenya Limited and East African Terminals Limited, commanding respect within the shipping and logistics industry. While he has stepped down from executive positions in these businesses, he continues to provide support as a strategist and business idealist.

Ali Hassan Joho is a generous philanthropist and the founder and patron of the Hassan Joho Foundation, a non-profit organization established in 2008. The Foundation is credited for numerous social projects in Mombasa County and the Coast region that have positively impacted on the lives of many people within the community he serves. The Foundation is involved in various initiatives in Education, Youth Empowerment and Entrepreneurship, Sports, Orphanages and Drug Rehabilitation initiatives within the County.

Recent Activities include the construction and modernization of primary and secondary schools with over Ksh100m invested, the provision of water through sinking of boreholes, bursaries that educate over 1,000 students per annum, sponsorship of various sporting activities and providing support of community policing and drug rehabilitation programmes within Mombasa County.

Ali Hassan Joho is married to a beautiful wife, known as Madina Joho.

Ali Hassan Joho and his wife are blessed with 4 children.

In his free time, Ali Hassan Joho enjoys traveling and socializing through sporting activities including golf, soccer and swimming.

Hassan Joho with his son and daughter 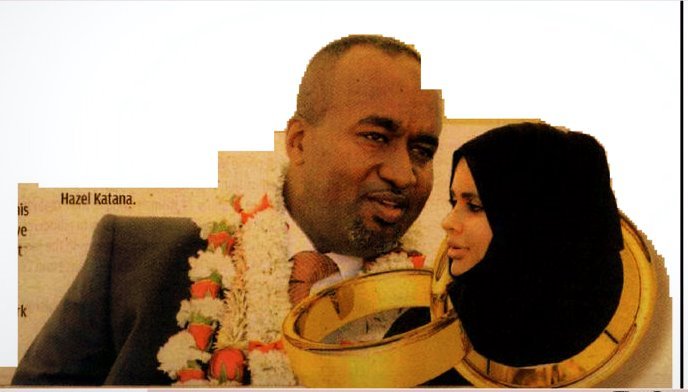 Take cheap US loans to invest in Kenya,Githae tells diaspora

100, 000 liters water tower to be installed at Amani Ridge the Place of Peace