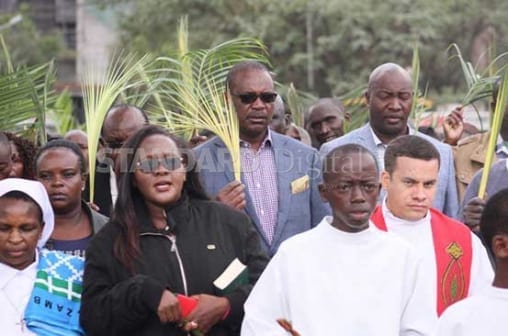 Orange Democratic Movement (ODM) leaders have said that the only way National Super Alliance (NASA) can defeat Jubilee is by making Raila Odinga the flag bearer. Speaking after Palm Sunday service at Our Lady of Guadalupe Church in Kibera, Governor Evans Kidero and Kibera MP Ken Okoth stated that Odinga was the only capable leader who can win the presidential elections. Okoth on the other hand stated that it was regrettable that people are asking Odinga to step aside for one of his co-Principals yet he was the most capable leader.

“People are saying that no Kalonzo no NASA what they need to know is that no Raila no NASA victory,” he said. This comes after National Assembly Minority Leader Francis Nyenze shook the alliance’s unity when he said Ukambani will only back the Opposition alliance if Wiper Party Leader Kalonzo Musyoka is its presidential flag bearer. Remarks by the Kitui West MP that the party will pull out of NASA if Wiper leader Musyoka is denied the presidential ticket was however downplayed by party members who insisted that Nyenze was neither speaking for the Wiper party nor the people of the larger Ukambani region.

NASA Principals have downplayed the endorsements saying that the alliance is working out a formula of identifying its presidential candidate and they will support whoever comes out successful.
Source link-standardmedia.co.ke