NEW YORK TIMES EDITORIAL BOARD: The Real Suspense in Kenya

Kenya’s national elections last Tuesday were closely watched around the world, less for the results than for the threat of violence that has marred past elections. Barack Obama, whose father was a Kenyan, had been among those urging the country’s leaders to “reject violence and incitement.”

That has not happened. Raila Odinga, a perennial loser, began crying foul long before the election commission declared that President Uhuru Kenyatta was re-elected with 54 percent of the vote to Mr. Odinga’s 45. Mr. Odinga’s unsubstantiated claims have already touched off rioting in parts of the country, and the violence could spread. 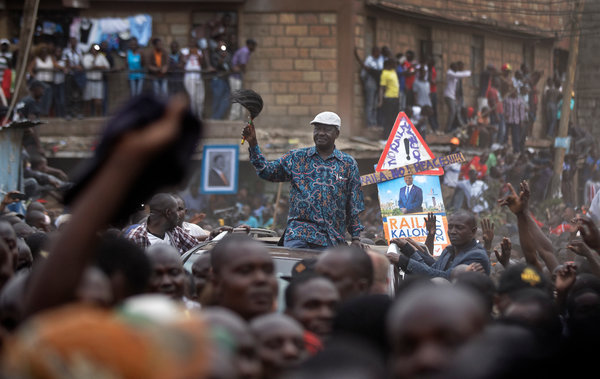 Raila Odinga was surrounded by supporters on Sunday in Mathare, a slum in Nairobi, Kenya.
BEN CURTIS / ASSOCIATED PRESS..

The presidency was one of 1,880 positions Kenya’s 19 million voters were to fill. It was the most closely and nervously monitored race because of the violence following past presidential elections, notably in 2007, when more than 1,300 people died and hundreds of thousands were displaced.

Since then the Kenyan government has made admirable changes to the Constitution, devolving considerable powers to 47 newly created counties so that the presidential race would not be a winner-take-all affair. But ethnic identity still plays a major role in Kenyan politics, with all but one president since independence, including Jomo Kenyatta, the first president and father of the current one, coming from the Kikuyu tribe, the country’s largest.

Both President Kenyatta and Mr. Odinga, a Luo, come from families and networks that have dominated Kenyan politics since independence, and both represent coalitions of ethnic groups. Mr. Odinga has once again fanned the embers of ethnic strife.

That is disgraceful and unnecessary. International monitors from the African Union, the United States and Europe said they witnessed no foul play; former United States Secretary of State John Kerry, co-leader of the Carter Center’s mission of election observers, praised Kenya’s election commission for its transparency and diligence. All observers have urged Mr. Odinga and other losing candidates to refer any allegations of fraud to the commission and the courts.

Mr. Odinga’s specific claim is that Mr. Kenyatta’s Jubilee party hacked into the election commission’s computers to manipulate results, using the identity of Christopher Chege Musando, the commission communications manager who was murdered a few days before the voting. His death remains unsolved. The commission said that there was an attempt to hack the computers but that it failed.

All that can and should be checked. But in the meantime it is imperative that Mr. Odinga strongly urge his followers to remain calm. At 72, he might mull the idea that a display of respect for the new Constitution would be a far better legacy than another bloody spasm of violence.

VIDEO: Nungari Muchai talks about hard Life in USA & why she went back

IT consulting: Majority of Africans in US struggle with low paying Jobs

video:Bensouda gives her reasons for holding on Uhuru’s case