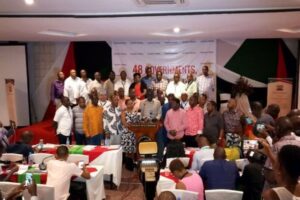 It has also emerged that contrary to Mr Nanok’s announcement that he would step down after six months to pave way for the automatic elevation of Kwale Governor Salim Mvurya to the coveted seat, governors allied to Mr Ruto have teamed up with those allied to the National Super Alliance (Nasa) to ensure this does not happen.

Governors interviewed by the Nation indicated that the CoG rules would be strictly followed and elections held after Mr Nanok’s term ends and that he would also be free to seek a second term.

Prior to the CoG annual general meeting at the Diani Reef Hotel in Kwale County on Friday, many had predicted that Mr Mvurya would easily dethrone Mr Nanok given the strong backing he enjoyed from President Kenyatta and helped by Jubilee Party numbers.

After opening the induction course for the county bosses at the hotel on Thursday, President Kenyatta had personally whipped a section of governors allied to the Jubilee Party to elect Mr Mvurya and his Kirinyaga counterpart Anne Waiguru as chair and vice-chair respectively during the AGM the following day.

According to Tharaka Nithi Governor Muthomi Njuki, Jubilee allied governors were to use their numerical strength to sweep all the key seats and only leave a few for the opposition.

Uhuru is playing someone: Is it Raila Odinga or DP William…

Things, however, changed on Thursday night when Mr Nanok, who is serving his second term as Turkana governor on an ODM ticket, launched a vigorous campaign to retain his seat.

The governors were holed up in various hotels on Thursday night strategising on the poll.

Mr Nanok and Mr Mvurya were also seen reaching out to their colleagues during various sessions at the retreat for backing.

All seemed well for Mr Mvurya until the late entry of vocal Uasin Gishu Governor Jackson Mandago in the race.

Mr Mandago’s unexpected candidature was backed by some governors from the Rift Valley, a development that threatened to split the Jubilee Party votes in favour of Mr Nanok who enjoyed the support of Nasa allied governors.

Some Jubilee governors, especially from Mr Ruto’s Rift Valley backyard, openly stated that they would rally behind Mr Nanok or Mr Mandago to “strengthen CoG and for the success of devolution.”

Mr Mandago was, however, prevailed upon to withdraw his candidature at the last minute, leaving Mr Nanok and Mr Mvurya to battle it out.

The going was, however, not smooth for Mr Mvurya as some of the Jubilee governors backed Mr Nanok, saying they feared the Kwale governor’s dalliance with State House would kill devolution.

A group of governors serving their second term led by Nyamira’s John Nyagarama lobbied hard to ensure the CoG was not divided along Nasa-Jubilee lines. Mr Nyagarama warned that they would kill the CoG if they chose to vote along party lines.

Vihiga Governor Wilbur Otichillo, who is allied to Nasa, on his part insisted that Mr Nanok be allowed to finish his term.

Governors Mike Sonko, Granton Samboja and Ferdinand Waititu, who are said to be allied to Mr Ruto, were seen pacing up and down the hotel’s corridors as the deliberations went on.

While several diehard Jubilee governors maintained that an election be conducted to end the stalemate, moderate voices maintained that the matter be resolved through consensus to avoid splitting the CoG along party lines.

“If we voted, we would have fatally split the Council between Jubilee and Nasa. We would have put the final nail on our coffins. We took a lot of time because we wanted to talk and agree. Everyone was allowed to talk before consensus was reached,” said a governor who requested not to go on record for fear of antagonising his bosses.

The push for a consensus, the Nation learnt, was championed by Kisumu Governor Anyang’ Nyong’o and his Meru counterpart Kiraitu Murungi.

It is this push that eventually carried the day, resulting in a gentleman’s agreement that Mr Nanok be allowed to finish his term before Mr Mvurya takes over.

This followed hours of negotiations with a majority of governors rallying behind Mr Nanok to the chagrin of the diehard Jubilee brigade.

In an interview with the Sunday Nation, Mandera Governor Ali Roba said Mr Nanok was retained for the sake of unity.

“It was a consensus by entire council for the unity of the country. The country needs healing,” Mr Roba said.

Mr Roba said the governors did not want to sow divisions by removing Mr Nanok just because he was a Nasa governor as CoG is impartial.

“Waiguru’s position was assured because of gender and because the position was vacant as former Taita-Taveta governor John Mruttu, who held it, lost during the August polls,” Mr Roba said.

He added: “It was a routine programme.”

He said the council would make a decision on the CoG slot once Mr Nanok’s term ends.

The council also named other chairs for various committees from across the political divide with Mr Murungi, Mr Njuki and Mr Waititu among the beneficiaries.

A governor who did not want to be named said Mr Nanok enjoyed support from colleagues from the pastoralist areas.

“Mr Mvurya forgot that the President and his Deputy, who vehemently backed him, do not vote in the Council of Governors,” said the source.

He said the idea of Mr Nanok being allowed to finish his term was brokered by Mr Murungi and Prof Nyong’o.

He said after the six months, the council will be subjected to another election which will give those interested a chance to vie.

Mr Nanok will also be free to seek re-election.

“Yesterday’s election was a gentlemen’s decision which is different from the law. The decision was made but is not binding,” the source added.