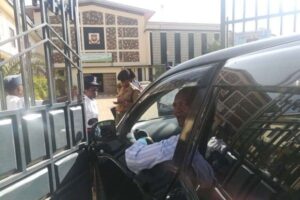 The fighting broke out after the MCAs accused the Speaker of being prejudiced during the special sitting.

This occurred when a section of the ward reps differed with Speaker Elizabeth Ayoo over her efforts to preside over a proceeding that was intended to oust a number of committee chairpersons and their deputies.

The fighting began when Ms Ayoo read a motion of ousting the committee chairs, but a number of the MCAs began shouting to stop the motion.

The Speaker did not take heed forcing Kojwach MCA Joan Ogada to grab the mace that was placed in front of the Speaker and clerks.

“Madam Speaker we cannot allow you to conduct proceedings contrary to standing orders. This motion cannot proceed,” Ms Ogada said as she walked away with the mace.

This prompted a section of the MCAs who were supporting Ms Ayoo to attack Ms Ogada. The mace was later broken after other ward reps decided to grab it.

The opposing assembly members wrestled Ms Ogada down before nominated MCA Evaline Otieno intervened with kicks to rescue her.

“I cannot allow a fellow woman to be assaulted as if she is not a human being. This assembly has turned to a battle field and I cannot spare those who can’t reason,” shouted Ms Otieno.

The members of the House took the opportunity to settle their scores physically with one another.

Ms Ayoo was rescued by the Sergeant-at-arms who removed her from the plenary after some of the MCAs threatened to assault her over the alleged bias. The MCAs remained in the house boxing and kicking one another.

Homa Bay OCPD Esau Ochorokodi had to intervene with his officers to end the fighting.

“The MCAs were fighting but we have salvaged the situation,” said Mr Ochorokodi.

A group of MCAs led by Eliphalet Osuri, Okuku Miregi, Julius Gaya, Paul Wamunga and James Ochieng accused the Speaker of causing the tension by taking sides during proceedings. Mr Osuri argued that the special meeting was convened contrary to assembly standing orders.

The MCAs accused the Speaker of conspiring with a section of them to oust them from the assembly committee leadership.