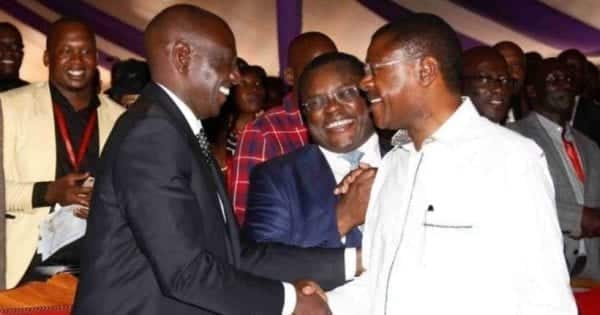 Deputy President William Ruto and Bungoma Senator Moses Wetang’ula have begun warming up to each other in what may lead to a new alliance ahead of 2022.

Ruto met key allies of the besieged Senator days after he vowed to teach NASA leader Raila Odinga a lesson after ODM MPs engineered his ouster as Senate Leader of Minority.

All nine Ford Kenya MPs from Trans Nzoia and Bungoma counties except Kiminini MP Chris Wamalwa were at Ruto’s residence in Karen on Thursday. Mr Wamalwa, who is also Minority Deputy Whip was reportedly away.

The group was led by Ford Kenya secretary general Eseli Simiyu, who served in the NASA management committee in a clear indication the meeting had Wetang’ula’s blessings.

Although nothing concrete has been put on the table, it’s understood that Ruto is exploring possibilities of forming an alliance with Wetang’ula’s party.

The deal, according to a source, may see Wetang’ula return to key House leadership this time on the side of majority in bid to solidify Ruto’s support base in Western.

“My take is that after the handshake, most politicians are asking what’s going on and in the process, you will see new alliances being formed. Consequently, the DP is making overtures to individuals and groups not in his camp as he seeks to consolidate ahead of 2022,” Onyonka said.

The House leadership other than the Speaker includes Deputy Speaker, Leader and Deputy Leader of Majority and Whip and Deputy Whip of Majority.

Another MP said the Ford Kenya leader has now resolved to re-engage and re-invent himself politically while not ruling out a deal with Ruto arguing that politics is the art of making the impossible possible.

If any deal is struck, the source disclosed that it won’t affect Senate Speaker Ken Lusaka but will look at another position which will not disadvantage the DP politically.

The legislator said, for instance, there will be no harm in requesting Kipchumba Murkomen to step down for Wetang’ula in future.

“In the event you accommodate Wetang’ula, and having accommodated Dr Lusaka as Senate Speaker then you bring both Jubilee and Ford Kenya MPs in Bukusuland together, you will have locked Bungoma and Trans Nzoia,” the MP close to the Senator said.

However, according to Eseli, the handshake meant that opposition MPs and the government co-operate insisting that the meeting was meant to discuss development and not political realignment.

When asked if Wetang’ula had given his MPs go head to meet Ruto, he said they had discussed and agreed to honour the invite as it was meant to discuss development projects. Eseli said: “Maybe it’s possible, it’s the beginning but the Thursday meeting was purely based on development. Nothing political for now.”

The leaders, through a statement from Ruto’s office said they discussed the expansion of the Kakamega airstrip, improvement of roads, revival of industries, especially Mumias Sugar Company, health, water and education projects.

“The completion of infrastructure projects in Kakamega County, especially the road and drainage network in Kakamega town is paramount,” the DP said on his Facebook page.