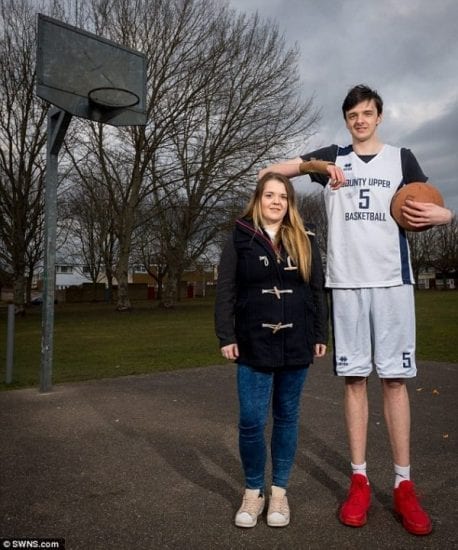 A 16-year-old British lad is being hailed as the tallest teen in the world as he stands at an incredible seven feet and four inches.

And to top it all lofty Brandon Marshall – who doctors say is still growing – has just fulfilled his sporting dream and been picked for the Welsh national basketball team.

‘It is crazy, walking down the road with Brandon.

‘People stop him, asking for photos with him.

‘To be honest I don’t know what height he is going to reach.

‘He is so shy as well bless him, he is so introvert.

‘When people notice his height, he says “oh here we go again, yes I am tall, yes I am Britain’s tallest teenager”.’

But he has now grown an extra five inches in less than a year and is believed to be the tallest teen in the world.

Brandon said: ‘I was normal size up until the age of nine.

‘I then had a big growth spurt.

‘I was about 6ft when I was about 13 and I started to grow a lot more by then.

‘Shoes have always been a problem because I will never be able to find them and they are really expensive.’

Brandon, who trains three times a week with national league team Bury Bulldogs, has now been selected for the Wales National Basketball team – as his mother is Welsh.

He is currently training for his first professional match and will be jetting off to Lithuania next month.

The teenager was able to slam dunk – slamming a basketball through ten foot high hoop while hanging on the edge – at the age of 13. Brandon, who also has size 17 feet, is still completing his GCSE’s and is currently looking for basketball academies where he will be able to complete his A-levels.

Lynne said: ‘All the good colleges that have good basketball academies attached to them are all fighting over him as to who will get him. He absolutely loves it.

‘He already now plays for Wales and he has just done his first training last weekend with the Welsh international team.’

Brandon is currently under the genetics team at Addenbrooke’s hospital as they want to investigate into why he is reaching these dramatic heights.

The hospital tested Brandon for Marfan syndrome – a genetic disorder of connective issues – but it was negative.

People with Marfan tend to be tall, thin, with long arms, legs, fingers, and toes.

Lynne said: ‘They want to look into why he is as tall as he is and they still haven’t got an answer to that.

When things go wrong,questions arise, where do you turn

Video:Sad-Tornado Survivor says she did not thanked the Lord because She’s an…

I was rejected: Octopizzo’s moving journey to the University of Pennsylvania