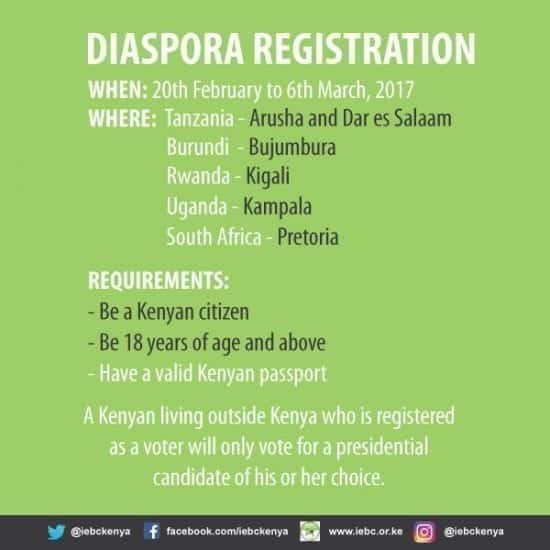 A section of Kenyans in the United States have protested a recent announcement by the elections body that it will only set up three polling stations in the country for coming general election.
In a petition being circulated on the internet and appealing to Kenyans in the Diaspora to append their signatures, the Minnesota based Diaspora Advocacy Group is urging Kenyans residing in the North America region to exert pressure on the electoral body to rescind the decision.
The group wants the Independent Electoral and Boundaries Commission (IEBC) “to establish a number of polling stations commensurate with the number of Kenyans currently living on the continent.”
Related Posts
VIDEO NEWS

During a visit to New York last week, IEBC chairman Isaack Hassan said that Kenya’s embassy in Washington, the United Nations mission in New York and the consulate in Los Angeles will be the only polling stations available for Kenyans living in the vast country. (READ: IEBC to set up 3 polling stations for Kenyans in US)
According to IEBC potential voters in the United States will have to first travel to the polling stations to register as voters and then make a second trip for the actual voting process.
“We have to do it gradually,” the IEBC chairman had said in New York, apparently basing his argument on a clause in the Constitution which states that the voting right of Kenyans in the Diaspora shall be realized progressively.
Section 82(1) says: “Parliament shall enact legislation to provide for the progressive registration of citizens residing outside Kenya, and the progressive realization of their right to vote.”
The Kenya Diaspora Development Group of Minnesota (KDDG-MN) argue that high travel costs involved in making the two journeys will shut out potential voters from participating in the elections.
The group said it will cost in excess of US$1000 equivalent to Sh. 85,000) to travel to the closest consulate just to register as a voter.
“Our position is that the establishment of polling stations should be primarily demographic-based rather than what the IEBC considers convenient,” says the group on its website.
Mr. Wilson Wanguhu, who lives in the city of Acworth, Georgia, wonders what rationale the electoral body used in arriving at the decision.
Speaking to The Nation in Atlanta, Wanguhu said that over ninety per cent of Kenyans in the United States will be disenfranchised.
“Why did the Commission spend so much of tax payers money collating views from the dDiaspora and then make unilateral decisions without regard to any of the suggestions by Kenyans out here?” he wondered.
But Kenya’s ambassador to the UN has defended the IEBC decision saying that the cost of establishing more polling stations would be prohibitive.
“We must be realistic,” Mr Macharia Kamau said from New York. “We could end up spending more money catering for the Kenyans in the US than entire amount allocated for the whole exercise in Kenya.”
The envoy said the commission was not in a position to go into every nook and cranny in America, noting that the government had only allocated $3 million for Diaspora voting.
He reinforced Mr Hassan’s position that the March election should be seen as a first step in allowing Kenyans abroad to take part in the country’s elections.

Word of the Day:Honoring your Word

UHURU TO LAUNCH ‘NO’ REFERENDUM CAMPAIGN

ICC and the Stability of Kenya

CORRIDORS OF POWER: ODM Elections Board Commissioner on the spot for receiving bribes

Video:”House of Prayer or Den of Thieves”