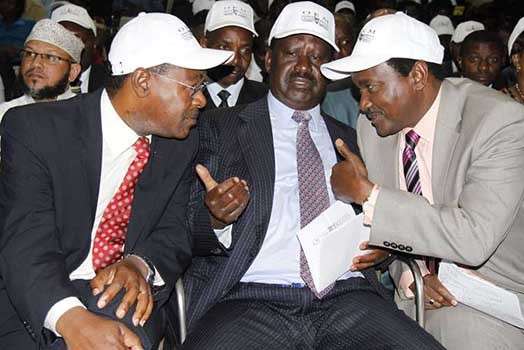 In a tweet, Mr. Kalonzo vowed to bring the two leaders together after the recent media attacks that have seen Wetangula and ODM party leaders (defending Odinga) exchange barbs.

“Mediation Conference 2018: I will mediate between my brothers @RailaOdinga and @Wetangulam and seek ceasefire,” he said.

Trouble began a week ago when the Ford Kenya party leader publicly declared that NASA was dead and accused the former Prime Minister of betrayal following his handshake with President Uhuru Kenyatta.

They also dared Wetangula to ask his party members to relinquish positions they had acquired in Parliament by the mere fact that they were in NASA.

Despite this, Wetangula appeared on Citizen TV for an interview where he insisted that his political journey with Odinga was over.

Mudavadi distances self from Raila-Kalonzo MoU, says he was not part of deal

Celebrating the Life of Susan Njoki Chege of Edmonds, Washington

Photos:Raila Odinga rides on a boda boda in Kisumu town