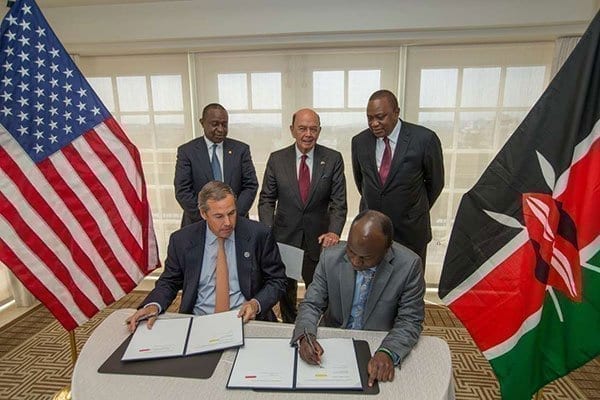 Kenya has signed agreements with a US company, allowing $237 million (Sh23bn) of investments in wind power and food security.

President Uhuru Kenyatta on Monday urged the US government to facilitate the operation of US businesses Africa.

The plant will provide a more reliable source of energy to the national grid and support the US Power Africa Initiative to double the number of people in Sub-Saharan Africa with access to electricity.

Related Content
What Uhuru will seek from Trump
Trump’s ‘America First’ seen in trade deals with EAC
With mitumba ban in tatters, what next for trade between Kenya, US?
The second agreement was a $5 million letter of commitment to expand the distribution network of Twiga Foods and improve food security and agricultural wages in Kenya.

It was signed between Twiga Foods and Opic in the presence of President Kenyatta during his meeting with executives of leading US companies under the umbrella body Business Council for International Understanding (BCIU).

Dr Kenneth Namunje and Mr Grant Brooke represented Kipeto Energy and Twiga Foods, respectively, while Ray Washburne, the President and Chief Executive of Opic, signed on behalf of his organisation.

“Kenya is open for business and all we want to do is package our partnership in a way that is mutually beneficial to you as a private sector and the people of Kenya,” President Kenyatta said.

The BCIU consists of 200 companies. It helps its members to reap from mutual relationships with government leaders worldwide.

Regarding the manufacturing sector, the President said Kenya intends to increase the sector’s contribution from 8.4 percent to 15 percent by 2022.

“This presents major opportunities for local and foreign investors in areas such as agro-processing, textiles and leather, the maritime sector, construction, iron and steel, and oil and gas,” the Head of State informed the meeting that was attended by US Commerce Secretary Wilbur Ross and more than 20 businesspeople.

“Given our long and well-established relationship, we can do more together and I invite the US companies to walk with us on the ‘Big Four’ journey.

“With so many opportunities open to us and given our long and well-established relationship, the time is ripe to make a change in our business engagement,” he added.

The Monday meeting was the third the President was having with the business executives; the last one was held in 2015.

President Kenyatta observed that his government has continued improving the business environment to boost investment opportunities.

Mr Kenyatta pointed out that the economy remained buoyant and resilient, registering a 5.5 percent average growth rate over the last five years in spite of acrimonious presidential elections and drought in 2017.

Commerce Secretary Ross and BCIU CEO Peter Tichansky commended the President for creating a suitable environment for the private sector to thrive in Kenya.

The US business executives expressed their desire to increase investments in Kenya following the President’s assurances.

Cabinet secretaries Monica Juma (Foreign Affairs) and Henry Rotich (National Treasury) were among the Kenyan delegation at the meeting.

Return of the Moi Dynasty

Raila in crisis talks to save Ababu