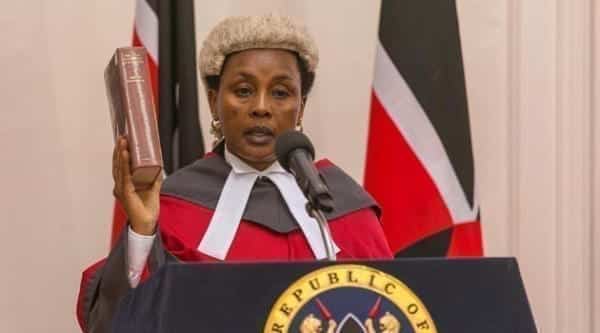 Deputy Chief Justice Philomena Mwilu has been arrested at Supreme Court in Nairobi over alleged corruption.

Judge Mwilu was on Tuesday taken to the Directorate of Criminal Investigations for questioning.

Moments after the arrest, Director of Public Prosecutions Noordin Haji called an urgent press conference on the matter.

Her arrest followed a series of meetings by the Judicial Service Commission, the judiciary employer, for the better part of the morning.

Interestingly, Judge Mwilu also attended the meetings and it is not clear if she was being grilled by her employer.

Mr Haji and Kenya’s top crime buster George Kinoti attended some of the meetings before Judge Mwilu was taken into custody.

The agenda and resolutions of the meetings were not immediately clear and it is expected that Mr Haji will communicate the same.

Staff at the Supreme Court went on about their business as usual, with the majority avoiding contact with journalists.

The arrest of such a high-ranking judicial staff, unprecedented in Kenya’s history, is the culmination of weeks of investigations into brazen corruption at the Judiciary, and is likely to send shock waves throughout the institution.

The Nation has followed this case for months after it learnt that the judge had been reported by the Kenya Revenue Authority to Mr Haji over the suspicious movement of large sums of money in and out of bank accounts.

Sources told the Nation that investigations on the judge have mainly revolved around transactions involving the collapsed Imperial Bank, and failure to pay taxes.

The Central Bank (CBK) appointed the Kenya Deposit Insurance Corporation (KDIC) as receivers of Imperial Bank in October 2015 following its collapse amid revelations that up to Sh34 billion of shareholder deposits had gone missing.

The investigators had previously focused on the directors of the collapsed bank and some CBK officials.

The judge faces numerous counts of stealing, abuse of office and unlawful failure to pay taxes.

Additionally, investigators claim that the judge has acted in contravention of the Leadership and Integrity Act by accepting a personal loan of Sh12 million from Imperial Bank.

The judge is also accused of engaging in misconduct in furtherance of personal benefit.

Chief Justice David Maraga, who heads the institution, has previously indicated that there will be no sacred cows, even within the corridors of justice, in the fight against corruption.

“I have no room for corrupt judicial officers,” he warned in June this year.

“Know that you are alone if you are corrupt and expect no sympathy, mercy or protection from my office.”

The suspect is currently being processed to appear in an anti-corruption court.

Tactical blunder that denied Raila chance to be president