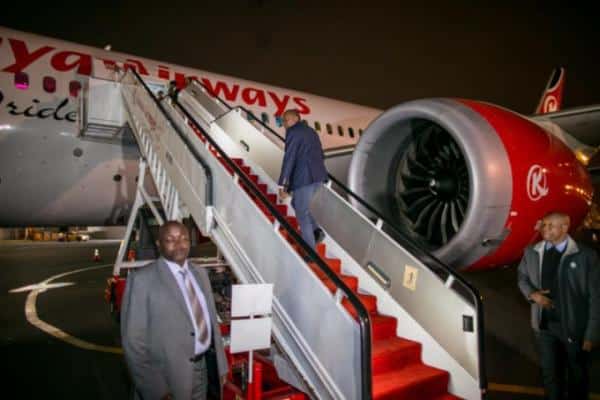 Trade and security will heavily feature in tomorrow’s historic talks between US President Donald Trump and President Uhuru Kenyatta who arrived in Washington yesterday.

The US is in dire need of strengthening relations with Africa while Nairobi, one of Washington’s reliable security and economic partner on the continent wants to increase access of its goods to the American market.

The meeting between the two heads of state comes at an opportune time for Kenyatta who is looking for partners and funding for his Big Four Agenda and just two months before national carrier Kenya Airways begins direct flights to New York.

The US is also in the process of replacing its envoy to Kenya — with Ambassador Bob Godec set to leave the United Nations Avenue office for Kyle McCarter — providing the two leaders an opportunity to set new ground for future relations for their two countries.

“Alongside the strong bilateral bond the country enjoys with the US, Kenya also benefits immensely from various US-sponsored multilateral programmes key among them the African Growth and Opportunity Act (Agoa), which President Kenyatta will seek to renegotiate with President Trump.”

Kenya has been the biggest beneficiary of the Agoa treaty which allows African goods access the US market without tariffs exporting products worth Sh47 billion last year.

Trade is however tilted in favour of Washington which exported goods worth Sh57 billion to Nairobi last year.

The US is however exploring the possibility of having bilateral trade agreements with individual African countries that will allow for qualifying African goods to access its markets duty free at the expiry of Agoa in 2022.

Nevertheless, the US media have termed the meeting between the two leaders as ‘generic’ and unlikely to provide headline-grabbing announcements but at the same time very symbolic of Trump’s change of attitude towards Africa.

“Placed in a larger context, putting aside South Africa, the Kenyatta meeting is a sign that Trump’s administration may finally be willing to engage publicly and constructively with a range of African issues, if only the president can get out of its way,” said the World Press Review.

“Kenya is a natural starting point for the Trump administration to rebuild its relations with the continent,” it added.

Although its relations with Kenya faltered during President Kenyatta’s first term, the US has over the years maintained being Kenya’s largest donor providing funding to the tune of Sh100 billion per year especially in the areas of health and security.

Also expected to be part of the talks is Kenya’s interest in the United Nations Security Council, a proposal already endorsed by cabinet.

Kenya is eyeing the slot for a non-permanent membership between 2021 and 2022 at the elections to be held during the 74th session of the UN in 2020.

The country’s candidature has been given impetuous following her commitment to fight terror, where over 20,000 top global suspects, have either been killed or arrested by the Kenya Defense Forces and the anti-terror squad.

“Kenya’s highly professional military is engaged in liberating, assisting in the establishment of an effective democratic government which will effectively kill Somalia as a terrorism cell.

In recent years, pirates have been arrested by Kenyan authorities and tried in Kenyan courts,” a senior source at the presidency said.

Foreign Affairs Cabinet Secretary Monica Juma led an advance team, and held a series of meetings including one with US Secretary of State Mike Pompeo and Robert Lighthizer, US Trade Representative, to discuss ways of strengthening trade relationship between the two nations. “Kenya is a vital partner of the US and President Trump looks forward to discussing ways to broaden the strategic partnership based on our shared democratic values and mutual interests,” said Ms Juma said.

The talks particularly focused on need to optimise on opportunities available under the Agoa as outlined in the recently launched National Agoa Strategy and action plan.

The team also held talks with Gil Kaplan, the Under Secretary of Commerce on participation of US companies in the Big Four Agenda as outlined in the MoU signed in June this year.

Kenya’s delegation also included Kenya’s ambassador to the US Njeru Githae and Dr Ruth Kagia, Senior Presidential Advisor. The US ambassador to Kenya Godec was part of the US delegation.