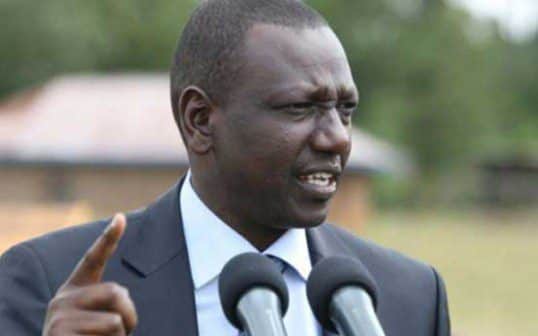 In the tweet posted on Thursday 23 August, the DP responded to the survey made by IPSOS Synovate that present a number of Kenyan politicians as corrupt.​

“Those running ‘injili ya shetani’ that unless your father was a minister, a vice president or a president however hard you work you must remain poor and if not a pauper you must be corrupt & have stolen, they should know that those without god fathers we have GOD the father. Shindwe,” posted Ruto.

Those running ‘injili ya shetani’that unless your father was a minister,a vice president or a president however hard you work you must remain poor and if not a pauper you must be corrupt &
have stolen, they should know that those without god fathers we have GOD the father.Shindwe— William Samoei Ruto (@WilliamsRuto) August 23, 2018

Ruto had earlier responded saying that the opinion poll was nothing but a propaganda, challenging the people conducting the poll to meet at the development arena of the people of Kenya.

“These constant, perennial, unending headlines about William Ruto this… William Ruto that… opinion poll this… corruption that… are all propaganda. I want to tell them that when they are through with the headlines, corruption and propaganda, let us meet at the development arena of the people of Kenya,” said Ruto.

The DP’s tweet however evoked mixed reactions among netizen and this is what some of them had to say;

I didnt mean to be harsh to the DP but in all fairness he crossed the moral rubicon long ago. And dragging Gods name is his escapades is not only offensive to the Lord but also insulting to our intelligence.— Ebrahim (@ebramow) August 23, 2018

Let he who has not sinned be the one to cast the first stone, Mr. Righteous Ebrahim. God defends himself. It’s nothing to do with your intelligence.

Why are you silent on the war against corruption. I have never heard you or read on you criticising the corrupt. Your silence haunts you.— Bromic Ouma (@ouma_bromic) August 23, 2018

There legal ways to follow… Go to court and reclaim it my brother.— Brian is mathew (@Brianismathew1) August 23, 2018

Why do you have to sanitize yourself?
If indeed you’ve never acquired part or all of your wealth through questionable ways then let your actions speak for you.#No_recycling_2022— Evans Baraza (@evansesibo) August 23, 2018

Shindwe kabisa God is in it. I will support you even 2022 because you represent the future of many Kenyan youths who have a dream of becoming a president who don’t have a tall relative or a connection to make it in life but depend on God Grace hardwork and prayer.— @muthomi Wycliff Muchena (@MuthomiWycliff) August 23, 2018

Please direct me to your god sir. I have been working very hard but am still ‘peasanting’.
Also help with exact prayers you used. Thanks— Nyambura Grace (@verimsupa) August 23, 2018

I feel his pain.. there is a societal belief that if you’re not a son or daughter of so and so you ain’t supposed to achieve something’s
Shetani ashindwe!! With such— #FreeBobiWine. People power, Our Power (@BGatheni) August 23, 2018

Injili ya shetani is when leaders in an economy like Kenya own personal choppers and a common man can not afford to put food on the table. When the gap between the rich and the poor continues to widen. False religion teach that riches=God‘s favor.— Maxwell Olwa (@olwa_o) August 23, 2018

We know of leaders who claim that they should take power bcoz their families had a modest lifestyle, that they had access to these hyper-privileged spaces and they fit to lead us. Forgetting that even sons of peasants can work hard to get rich and have equal chances????????tagotaa— Hon. Gideon Keter (@GideonKeter) August 23, 2018

Five interesting things you did not know about Anne Waiguru

Uhuru, Raila pledge to respect voters’ as they share platform

VIDEO:Drama as Man claiming to be Ntimama’s son attends his funeral