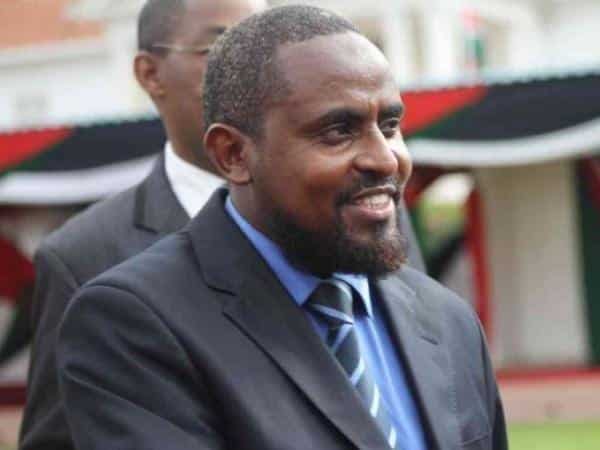 Former presidential candidate Mohamed Abduba Dida is facing a Sh12 million divorce case from one of his three wives.

Estail Ali Ibrahim filed for divorce to end her 10-year marriage, citing cruelty, contempt and disrespect from Dida whom he accuses of calling her a prostitute.

She wants Dida restrained from spreading what she terms as accusations about her, including allegations of adultery when she was married to another man, Takrem ‘Thomas’Daido Dulu, before meeting Dida.

She also wants the court to compel Takrem Dulu to undergo a paternity test to ascertain that he’s the father of her 18year old son.

But Dulu petitioned that his name be expunged from the son’s birth certificate as he’s not the father.

Estail says Dulu-whom she asked to convert to Islam- left her after she gave birth and met Dida whom she is now divorcing.

In her case at the Kadhi’s court in Nairobi, Estail is seeking Sh12 million as accrued expenses calculated at a rate of Sh100, 000 per month over 10 years.

Estail argues she has been Dida’s wife since September 5th 2008 under the Islamic Sharia Law and says Dida paid Sh1, 000 as bride price.

Their marriage at Masjid Nur mosque was witnessed by Sheikh M. Hassan, A. Razak Moulid and Abdi Ali Ibrahim according to the marriage certificate serial number B13306/296/2008.

In her Divorce case No. 112 filed in April last year, she claims that Dida has not contributed financially to the maintenance of the family in terms of food and shelter and has instead left the burden of to her, even after she lost her job in May.

Estail claims that she has been a co-wife to Dida’s other wives Amina and Rukia-but he chose to give priority to his first wife, alleging she has been patient for a long time.

Dida’s wife has also asked the court to compel him to provide for the accrued bills, including and not limited to consolatory gift for the period of marriage and pay her three monthsjiddah alimony.

She has also requested the court to have Dida bear the cost of the suit and give further relief as the court may deem necessary.

The divorce petition states in part:

“That the respondent (Dida) has treated the petitioner (Estail) with cruelty and contempt by demeaning, disrespecting and abusing her verbally and physically on several occasions.”

Estail prays that the marriage be dissolved through faskh as per Islamic sharia as efforts to settle their marital woes and salvage their union have been futile.

Dida’s wife has asked the court to not only dissolve the union but also issue Dida with a divorce certificate and a permanent injunction restraining the former teacher from visiting or interfering with her quiet enjoyment in any place of residence of office where she may choose to stay or be.

She also wants Dida restrained from “spreading  false accusations about her including and not limited to allegations of adultery in her previous relation with a Takrem ‘Thomas’ Daido Dulu.”

Estail has asked the divorce court to compel mobile service provider Safaricom Limited to print the calls and SMS messages made by her and Dida to her former husband Takrem ’Thomas’ Daido Dulu whom she also compelled to a paternity test to ascertain  that he is the farther of her 18-year-old son, so that the boy could acquire a national identity card as required by the National Registration Bureau.

Dulu, in a sworn affidavit claims that he met Estail in 1998 and dated for a while before she asked him to convert to Islam before marriage.

He alleges that he converted to Islam and married the expectant Estail but she filed for divorce immediately after the birth of her son. He denies being the child’s farther.

“That Yusuf Takrim is not my biological child but dam ready to undertake a DNA to ascertain his paternity should need arise,” Dulu says in his affidavit.

However, a birth notification certificate serial number 661385 dated 28 May 1999 lodged at M.P Shah Hospital has Thomas Daido Dulu and Estail Ali Ibrahim as the father and mother of Yusuf Dulu Daido.

Certificate of Birth number 6084334 entry number 2616128890, also lists the two as father and mother to Yusuf and that information particulars including the name of the father of the child given for purposes of registration of the birth of child were supplied by Thomas Daido Dulu as indicated in part 14 as the parent in accordance with the provision of the Births and Deaths Registration Act

Dida is yet to respond to the divorce petition.