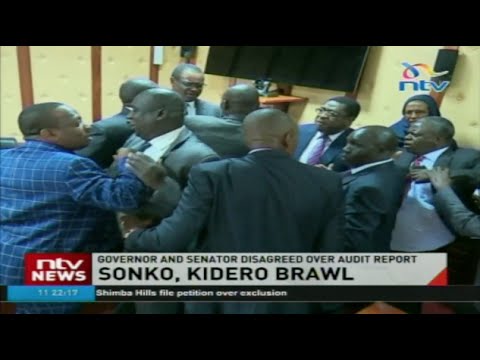 Former Nairobi Governor Evans Kidero and his successor Mike Sonko have been political arch rivals. On June, 15, 2016, there was drama at the senate when the two leaders engaged in a physical fight.

The fight between the two leaders led to the disruption of a session of Committee on County Public Accounts and Investments abruptly.

It all started when Mr Sonko sought to present documents showing that Kidero had grabbed several private properties since he took over office.

The then committee chairman Anyang’ Nyong’o allowed him to present the documents, but the governor continued launching attack after attack against his successor.

“This county government has been taking away properties belonging to the people of Nairobi. They give fake demands of rates and then grab the property. They then kill the people. I have evidence to prove all these. I am ready to file an affidavit,” said Mr Sonko at one point.

The claims angered Kidero who confronted him.

Members of the press were asked to leave when the fight ensued between the two leaders.

Kidero maintained that the sentiments of the then senator were baseless and ill-intended.

The scene was dramatic until the session was adjourned.

Kidero was recently arrested over allegedly mismanagement of county resources.

Miguna was threatened and FORCED to FLEE

LSK Want Sonko to be punished after attack on AG