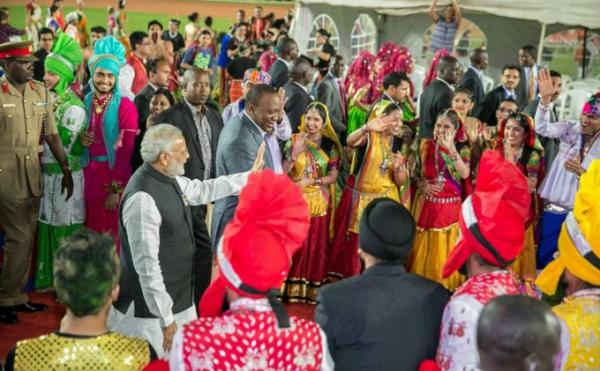 When Indian Prime Minister Narendra Modi visited Kenya in July 2016, something mysterious happened: Kenyan Indians sprout from hibernation. As a Kenyan who loves to travel, I have been to many small towns like Kosirai, Khumusalaba, Kakamega and Malanga; I also spent a few nights in Loitoktok, near the boarder of Kenya and Tanzania. In these places, I always encounter a large number of original natives: Luo, Luhya, Kikuyu, Miji Kenda, Kamba, Masai and other indidegnoius groups. I have always thought that there are Indians in Kenya, but somehow in all my analysis of Kenyan national events, they do not feature as much. They are in Eldoret and I do not see them!

It was therefore shocking and eye opening to see thousands of Indians in Kasarani stadium during the visit of Indian prime minister. This mysterious reality shocked me to the point that I watched the event again, not to listen to the prime minister, but to behold a cultural anomaly! My question is, if Indians are historical citizens of the republic of Kenya, why is it that during our national events, they are nowhere to be seen? Are they afraid of native Africans, are they afraid of the light and they come out during the night, or is the cast system that discriminates against dark skinned people predominantly espoused within the community? What do Indians tell each other about native Kenyans? Any one knows?

To be fair, let me confess that the Indians I knew, not in Kenya, were very good human beings. To finish my Masters of Divinity I was required to have a practicum. My college roommate introduced me to his church, which was an all Asian Indian Church in Chicago. I served there as an associate teaching pastor for three years. My experience with the Asian Indian community was very positive, they were genuine believers in Christ who, like me, were immigrants seeking to find their identity in the United States.

The senior pastor, Peter Pereira, and his wife were an example of the purity that can be experienced when Christ overcomes racial and tribal differences. We served Christ without prejudice.

With that in mind, I have wondered whey Indians in Kenya do not mix with Kenyans. It is true that Indians segregate themselves in certain neighborhoods. I noticed that in Mombasa, there are specific estates where only Indians live and they do not welcome Native Kenyans to join them. In Nairobi’s Parklands, I have noticed that they own a lot of houses there, but even with that, it is hard to note how many they are because they do not join the locals. I used to see them in Westland before the terrorist attack on the Westgate mall. But when the Indian prime minister came, thousands appeared at Kasarani. Though Kenyan born Citizens, they came out as if from the ‘darkness’.

It seems that humanity have a tendency, no matter how progressive, to segregate themselves. Watching the memorial services of both Aretha Franklin and Senator John McCain, knowledge confirmed my historical and biblical orientation. It is true that God’s decrees are true and absolute. And no matter how much humanity tries to escape from them, their mandates remain true.

To illustrate this fact, let me quote from a passage in the Old Testament. “ . . .. So the Lord scattered them from there over all the earth, and they stopped building the city. That is why it was called Babel[c]—because there the Lord confused the language of the whole world. From there the Lord scattered them over the face of the whole earth.” (Genesis 11:8,9 from 1) Racial segregation is a biblical curse. Even the church is guilty!

Though all races loved Aretha’s music, the church service was under the Black American culture and program. The white visitors were stuck far away in the background where they could not be seen. The event for Senator McCain was White. Part from Barak Obama, his wife, and a token of one church elder, 99.9% of the guests were white!

In the same way, Indians in Kenya genetically decline native Kenyans. And black and white in America will always be like oil and water! Blessed are those who seeing the CURSE, seek the cleansing of the WORD, “. . . love your neighbor as you love yourself.” Mark 12:30,31.

Years ago, Mary, a white and young college student took a young Kenyan pastor to her home in Wisconsin for thanksgiving against the odds of race, taught him much about Non-racial Christ.