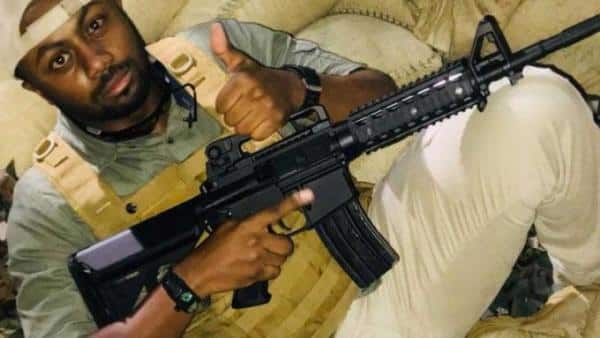 The man being held by the police over the murder of Monica Nyawira Kimani dabbled as a private security agent for sections of Jubilee party honchos in the run up to last year’s general elections, the Saturday Standard can reveal.

So well-known is Joseph Kuria Irungu within high Jubilee political circles that detectives investigating Nyawira’s murder are struggling to make a breakthrough in the case despite having presented the suspect in court.

Among the stumbling blocks in solving Nyawira’s murder is a visit by state officials to the police station where Irungu was first held demanding for his release.

Two groups of mercenaries from abroad are also said to have pitched camp in the country and are working round the clock to prevent Irungu, a trained mercenary, from spilling the beans.

BEING TRACKED: Movements of Jowie in the murder of Monica…

‘When he came back in the room he was crying, telling…

Having trained as a mercenary in Afghanistan the key suspect in Nyawira’s murder was in the process of firming up his own security company which he claimed specialized in close protection, VIP protection, executive protection and “special projects.”

In an Instagram post, Irungu claimed his company had offices in the UK and the United Arab Emirates. “Our highly qualified and exceptionally trained personnel meet our individual client needs. We also recognize that each client and their requirements are different,” said Irungu.

During last year’s elections, former Taita Taveta Women Representative Joyce Lay procured the services of Irungu as a bodyguard when she combed the expansive county gunning for Senator position.

Women Representatives are provided with security by the State but Irungu who is not a licenced fire arm holder was always around Ms Lay and armed.

The politician who lost her quest to be Taita Taveta Senator refused to comment for this story.

However among the top commenters on Irungu’s Instagram page which is now locked are individuals closely linked to the Jubilee Party and sections of a prominent family.

In one photo where he regaled in military clad armed to the teeth says, Irungu, possibly breathing out after a mission, posted: “I regret nothing.”

A follower took him up on it: “Not even the countless people you have murdered?” In a veiled threat, Irungu’s friend who shares a prominent Kenyan family name shot back:

“My guy, your name is Hermes and you can talk, read your history,” says the response.

Irungu simply grinned back at this threat and exclaimed in Swahili: “Watapona.”

But it is the murder suspect’s coziness with Nairobi’s celebrities that sold him out. The man was a household name in at least two Nairobi uptown drink joints frequented by who is who in the country.

So far there are three equations that are key to solving Nyawira’s murder. What was Nyawira going to do in Dubai? Was she escaping from something or going to meet her fiancé as claimed? What was the relationship between Nyawira and Irungu? And what was Irungu’s role in the Jubilee Party during the elections?

What is clear so far is that the manner in which Nyawira was brutally murdered was carried out by a professional assassin.

However, Monica’s family has been flop flopping on the information they have been giving to the media since last week on Thursday raising questions on exactly how much they know on why their daughter was murdered.

The Saturday Standard has been unable to find any records showing Nyawira was a student at the Technical University of Kenya (TUK) as claimed. Irungu we have established enrolled for a certificate in Food and Bevarages but dropped out in 2012 due to lack of school fees.

Yassir Mohamed, a Sudanese national and the man Nyawira’s family last week said was her fiancé whom she was supposed to meet in Dubai was also not present at her requiem mass or funeral yesterday. The deceased’s father, Bishop Paul Ngarama had told this paper that Yassir had flown to Nairobi on learning of her murder. Irungu has spent a considerable amount of time in the United Arab Emirates (UAE) under resident number 784-1990-0858139-1.

“He is even willing to talk to the Press. Nyawira’s brother will connect you to him,” he promised us about Yassir- last Saturday when we first broke the story.  It emerged yesterday that Irungu was well known to Nyawira’s family and they had dated at some point (read separate story).

Additionally the deceased was living a high flying life having acquired wealth within a very short time but this too has not been questioned. By her family’s admission she had recently bought her mother a Subaru Impreza, assisted her brother construct his house and purchase a car plus she was supposed to buy her father a Toyota Land cruiser V8 next week. All these at age 28.

In Buruburu estate where we have also reliably established that Irungu lives, those who know him say he has been presenting himself as one of the presidential guards.

So feared is the man that no one wants to talk about him that several sources including his neighbour in Buru Buru phase two agreed to show us Irungu’s house only to develop cold feet at the last minute.

Mechanics who have been repairing his cars also went under despite the fact that we had been informed that they know where he lives.

“I moved away from that house so I cannot remember Irungu’s exact house. Actually no one here wants to talk about him. It’s too dangerous,” said the neighbour.

In an interesting incident that took place at the garages in Buruburu phase 5 last year, Irungu was so enraged by a boda boda driver who had hit a black Toyota Prado he was driving that he handcuffed the man and took him to a police station. He impounded the motorcycle and had it locked at a primary school for almost 10 months.

Such is the power that the man wielded that it wasn’t surprising when it was reported that he had told the police that the murder probe will hit a dead end. TV Journalist Jackie Maribe yesterday went back to Criminal Investigations Department (CID) Kiambu road for further interrogation after she presented herself to the police on Thursday accompany by her parents.

However although Ms Maribe told the police that he knew Irungu in January this year, the Saturday Standard understands that the two knew each other at around June last year. Irungu by then had become a common face in the Jubilee presidential elections same as Maribe.

“We all knew he was part of the Special Forces because he was ever present,” a journalist who was extensively covered Jubilee during the elections has confided to us.

Close friends to Maribe who were in his company on Thursday night at Kiu Lounge, off Dennis Pritt confided in the Standard that there was an altercation between the two love birds.

“Joe joined Jackie and her friends at the club. Jackie made some comments which didn’t go down well with Joe. She ordered him to hand over her cars keys and ATM in front of her friends. Joe protested before them,” said a friend who didn’t want to be quoted.