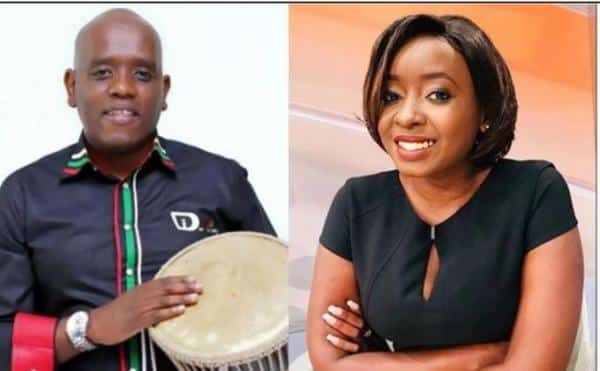 Bold technology guru has wowed Kenyans, more so women, with his display of love for Jacque Maribe in and outside court.

“And therefore take the present time, with a hey, and a ho, and a hey nonino, for love is crownèd with the prime.” – William Shakespeare​

From the day the news anchor and her fiancé, Joseph Kuria Irungu alias Jowie, were charged with the murder of Ms Kimani, Mr Itumbi has been the one constant face in the courtroom.

Both seem to bring out the best in each other. From the downcast girl who clung to her dad in a police station, the Maribe appearing in court now is bold, smiling and confident.

Journalist Jacque Maribe is hugged in the dock by Dennis Itumbi at the Milimani Law Courts. [George Njunge/Standard]

At the touch of love, they say, everyone becomes a poet, and in times of trouble, the poem becomes the love.

On the day of her first court appearance, despite her boyfriend sitting next to her, Mr Itumbi gave her a deep hug (see pictures) before extending a similar but lighter courtesy on the man.

And on Wednesday, Itumbi hopped into the dock and sat next to her. On social media, Itumbi has penned a plethora of poems for Maribe, so much so that he is now the man every woman would want in her corner.

With every post, he is winning legions of admirers, especially among women, as he has stuck out his all for Maribe. On Wednesday, just before her bail hearing, Itumbi penned a scintillating verse “from the depth of a soul that has always connected…”

“Situations come and go, but our friendship will outlast fake headlines, rumours, false accusations, social media updates, the blog frenzy and even the unfair comments thereafter…

The full poem exudes an energy and warmth that every woman desires, especially in the kind of situation Maribe finds herself in. It’s a warmth that can even be felt in their gazes.

Before then, he had penned a similar poem, this time addressed to Maribe’s child, but singing her praises.

They were good friends long before she met, fell in love with and got engaged to Jowie. Friends say Jowie was quite the bolt from the blue that swooped down and won her heart.

At the time, Itumbi put on a brave face, wished her well and moved on. The resurgence of his affection in court, however, has all the signs of a love-struck man – one completely taken by Jacque’s beauty.

In 2015, Itumbi shocked many when he stormed a live TV show to deliver a surprise birthday cake for Maribe.

It was a romantic first in Kenya’s broadcast TV history. No wonder Maribe, who was winding up the Citizen TV lunchtime news, wept.

Itumbi later took to social media to crown the day with what he does best – poetry.

Friend or more than friend, Itumbi’s comportment in the face of Maribe’s predicament is pushing the ceiling for men.

And women are praying for more Itumbis in their lives.

Are you my father?Happy ending as girl re-unites with father

Keep off NYS, CS Kariuki warns Opposition as she campaigns for Uhuru

Hear the Word of the Lord: A Prophetic Call to Rwanda and Kenya