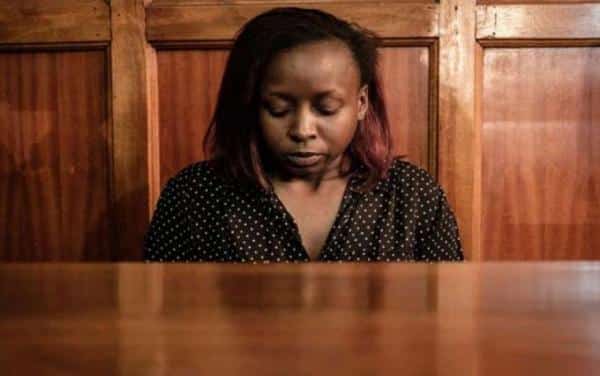 Murder suspect Jacque Maribe now claims she is standing trial only because of her romantic relationship with co-accused Joseph Irungu alias Jowie.

The two are charged with the murder of businesswoman Monica Kimani.

In an affidavit responding to the prosecution’s application to deny her bail, Ms Maribe said she was an innocent lover and should not be held responsible for Mr Irungu’s actions.

She said her bail application should be considered on its own merit without factoring in her fiance’s conduct.

The journalist also sent a condolence message to Monica’s family, saying she was praying for their peace of mind.

She stated that she could not account for Irungu’s movements and who he associated with.

“The only reasons I am standing trial are that I was in love with a person the prosecution have interest in. I allowed him to come live in my house and I allowed him to use my vehicle. There is no witness or forensic material to associate me with the murder,” Ms Maribe said.

Monica was killed on the night of September 19 at her Kilimani home in Nairobi.

Maribe regretted the prosecution’s decision to charge her with murder on account of her relationship with Irungu even when there was no evidence placing her at the crime scene.

“Irungu was my fiancé as at then and in the circumstances, I definitely communicated with him. It is most unfair to use the communication between me and him in the given circumstances of our then existing relationship as a reason to deny me bail,” she argued.

On the prosecution’s claims that her house was a secondary crime scene, which she could interfere with if released on bail, Maribe said she had already surrendered it to investigators and had no intention of going there.

She said she was not home at the time the prosecution claims Irungu burned some clothes to allegedly destroy evidence.

“Any of his actions are not necessarily sanctioned or attributed to me. I was not there if there was any burning. I personally was not aware and did not endorse or authorise any burning of anything,” she said.

She stated that the spot where the prosecution says the fire was lit was not in her compound.

On claims that her car was located at Monica’s residence on the night she was murdered, Maribe stated that it was common knowledge that Irungu was her fiancé and used her car but that she could not account for the places he went with it.

She also denied being arrested or switching off her phone when investigators were looking for her, stating that all her relatives, friends and colleagues accessed and spoke to her on that day.

Maribe further dismissed claims that she would interfere with witnesses on account of her high profile status, saying her humble circumstances had been exaggerated and that her personal standing in society should not be used as a basis to deny her bail.

Video:Rufftone and The GSU – Mungu Baba