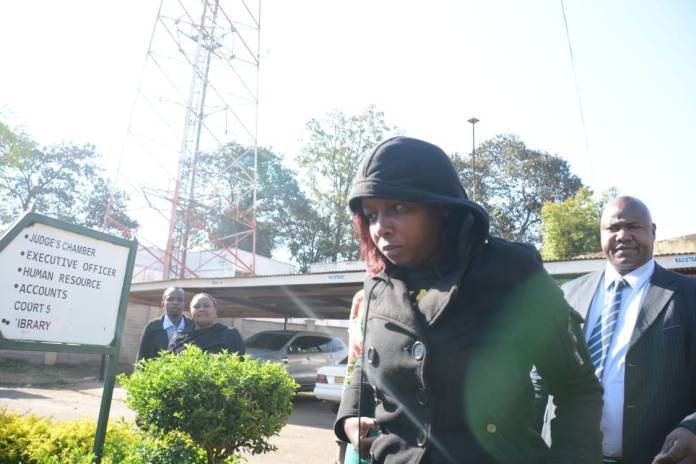 Reports from those close to TV host Jacque Maribe indicate that she is pregnant with murder suspect Joe “Jowie” Irungu’s child.

Jacque who is set to be charged with the crime of being accessory to the murder of Monica Kimani, is contemplating what she can do as Joe Irungu and herself faces years behind bars in case of conviction. She is still hopeful that being release on bail might offer her an avenue to handle the pregnancy.

Jacque Maribe not only hid the crime from the police but also helped Joe Irungu burn his bloodied clothes and took him to hospital.

Meanwhile, Brian Kasaine, has claimed that Joe Irungu stole his gun from his house and used it to commit an offence. It’s not clear how this theft came to be but sources within the DCI have revealed that Brian’s statement is clear that he never gave Joe the gun and only realised that it was missing when he was arrested.

Brian will have to explain to the court what measures he took to secure his weapon as it is a requirement that civilian gun owners have safes in their offices and residences to keep it away from those not licensed to handle it.

The police have linked TV girl Jacque Wanjiru Maribe and her fiance of two months Joe Irungu alias Jowie to the macabre murder that every new discovery reads like a movie script.

Maribe has distanced herself from the murder, telling police that she learned about it while reading the news on Friday 21 during the 4 pm news bulletin.

But sources privy to the details intimated to Kahawa Tungu that Maribe might not be the innocent girl on TV. She apparently knew about the entire plan to get rid of Monica long before her return to Kenya from Juba.

Sources say that Jowie was supposed to pick up the deceased from the airport and take her for drinks then rob her. But it is said that the businesswoman carrying with her Sh5 million, was too tired from her trip, and declined the invite.

“Transferring cash from South Sudan through the banks is an epic task. You waste a lot of time in the banking halls and bank charges are punitive. So she preferred cash in hand,” the source said.

Kahawa Tungu has also received word that Ms Maribe who will remain in custody at Gigiri Police Station until October 11 pending investigation could be pregnant.

Could this be the reason why Jowie, a mercenary for hire and a bouncer in the UAE, resorted to stealing from Monica to sustain a lavish lifestyle for him and his TV girl?

Maribe is apparently one that enjoys the finer things in life and with that comes a lot of pressure for a man like Jowie whose source of income remains a mystery.

On the night of the murder she and Jowie are said to have had a disagreement about him using her car that has already been dusted by the police.

In an affidavit seen by KahawaTungu, the journalist told detectives that her fiance tried to commit suicide on the night of 20/21 September by shooting himself in the chest.

He apparently shot himself after they got into a heated argument. Jowie on his part said that he was attacked by three men outside their Royal Park apartment then later said that the attack happened in the house.

If found to have known about the murder and concealed the information from the authorities, the journalist could be charged as an accessory to murder.

The hunk does however have a home in Buruburu Phase 3 (Laset Court Buchuma) where he lives with friends.

The house has been searched by the police but nothing was recovered. Police also recovered a hoodie and kanzu Jowie used on the day of the murder and $60,000 in cash (Ksh 6million) hidden in Jacque Maribe’s house.

Jowie is being held at the Muthaiga Police Station after it was established that he was the last person seen with the deceased while wearing a white Kanzu. Maribe’s house maid has told the police that she saw the accused burning the kanzu and a jacket on the fateful night.

Police have however recovered a piece of the cloth that did not burn.