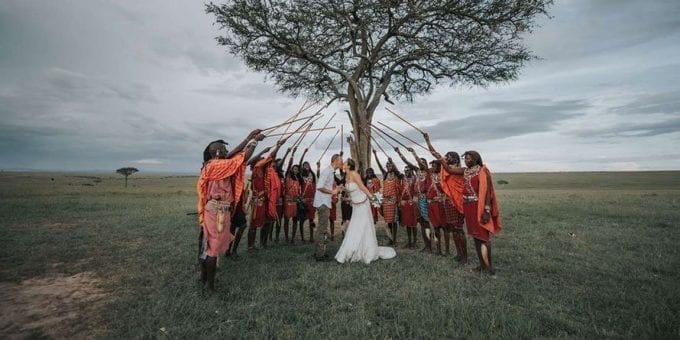 For years, many wealthy couples have obsessed with doing dreamy weddings in beaches or castles.

Now they are getting married in national parks or conservancies with the roars of lionesses or elephants trumpeting in the background.

They charter aeroplanes to transport their guests to the wilderness, hire all hotel rooms or villas or rent luxurious private homes that are turned into intimate spaces and then they fly in the peonies or the roses, flowers that elegantly blend in with nature.

What entices many is doing a lavish wedding in a unique location with views of Mt Kenya, wild animals roaming and that has luxury lodges and camps for guests as well as the colourful culture of especially the Samburus.

Alexandra Atkelsky, a planner and floral designer in Kenya who has organised weddings for wealthy clients from different parts of the world says Laikipia is now a playground for high-profile couples.

“Many celebrities love Laikipia … it is a whole other world in itself. When they drive through Nanyuki on a clear day they see the snowcapped mountain and it just takes their breath away,” she says.

Most of these couples hire private homes such as Arijiju which is open to guests for a very small proportion of the year or Cottar’s 1920s, a bush villa in Mara or Mahali Mzuri in Motorogi Conservancy in Maasai Mara owned by Richard Branson that costs about Sh1.9 million during low season and Sh2.9 million in high season for exclusive use of all the 12 tents.

“Lewa Conservancy, which is also popular with high-end clientele, has private houses like Lewa House and Sirikoi which attract Americans, mostly from New York. Mukima House built in 1940s, has its own dam. They all have stunning views of Mt Kenya which is what sells Nanyuki. I have a wedding coming up in the Aberdares Country Club in a colonial building, and that’s going to add extra charm and character to the day,” Ms Atkelsky adds.

A couple during their wedding. PHOTO | COURTESY

The increase in number of chartered aeroplanes to Laikipia and Nanyuki has made it easier to transport guests to the conservancies.

“I’ve done an exclusive wedding at Mahali Mzuri in Motorogi Conservancy in Maasai Mara for a British couple who rented out the property. They were very high-profile to the extent that all the staff members allocated for the occasion were bosses in their departments because of the kind of money that was being spent. They had never been to Mara before. I flew in flowers, decor and other things from Nairobi,” says Ms Atkelsky who handled all the logistics.

The planner who also does floral arrangements, says the good thing about doing exotic weddings in Laikipia is that she gets perfect flowers from Timau and Nanyuki farms.

“I get the premium export quality, but they are slightly more expensive at about Sh3 to Sh5 more per stem,” she says. To spice up their days, a few of her clients also seek out traditional Maasai weddings or blessings.

“Last July, we had a couple from Miami in the US who wanted a Maasai blessing. They stayed in Saruni Lodge. She loves designer dresses and was wearing a red Alexander McQueen dress which coupled with a Maasai shuka. It contrasted well with the landscape and the manyattas. They actually flew from Diani and landed in Maasai Mara for the wedding. They went through the entire process, including the elders spitting in their shoes as a blessing. A lot of people are certainly interested in the culture,” says Ms Atkelsky.

Bush weddings is a growth market increasingly capturing the imaginations of those who want to wed differently. However, sometimes the planning may go wildly awry like when five lionesses pitched tent under the wedding spot.

Pareet Shah of Cheka Photography who captures the blissful memories in exotic destinations has seen it all.

“One time, I landed at Ol Kiombo airstrip in Maasai Mara and as we were driving to Ashnil Mara Camp, we spotted five healthy looking lionesses relaxing under a lone tree. I then noticed our driver panicking and talking animatedly over the radio in Maa- ‘Olgatuny olgatuny!!’ I still had no idea what was going on. ‘Pareet, we have a problem. This is the tree that Noelia and Reuben are going to get married under in two hours!’”, he said.

Mr Shah says that of the safari weddings he has shot in the northern Kenya, few of the couples have been Kenyan.

“Most of the weddings tend to have two to 15 people. When it comes to Kenyans, whether that’s Africans or Asians, these ceremonies tend to have between 200 to 400 people and only a select number of properties in that region can accommodate that many people,” he says.

For instance, Mr Shah attended a high-end wedding in Ol Pejeta where the bride had a big family from Ethiopia and the groom had an equally big one from Kenya.

‘‘The beautiful ceremony was in the shadows of Mt Kenya and this was followed by a crazy party at night complete with lots of exotic Ethiopian food and dancing,” he says. Many of his international clients, like Noelia and Reuben from Spain, are also attracted to safari weddings because of the vibrant culture rather than just a typical Christian wedding.

“It was actually a surprise wedding for Reuben as he had no idea he would be getting married on that day. Noelia, his beautiful bride from Spain, wanted to surprise him by having the wedding in a location that meant a lot to them: The Maasai Mara. The look on Reuben’s face when he saw Noelia step out of the safari Land Cruiser in her white dress with the colourful Maasai beaded jewellery was absolutely priceless. There was a moment of confusion for a split second before he realised what was going on,” says Mr Shah.

He adds: “Once the initial surprise had died down, they proceeded with their traditional marriage ceremony. A cultural troupe of 20 men formed a spectacular bridal party, singing, dancing and jumping whilst the overhead clouds were gathering to tease us. But the rain thankfully never came down that afternoon. A Maasai elder carrying a wildebeest tail in one ochre-painted hand and a glass of champagne in the other hand. It was a visual feast and a clash of cultures that only this location could pull off well.”

Most couples that usually hire him like the fact that he is also a wildlife photographer.

“They get three different types of photos. They get shots of the actual ceremony which usually merges cultures and often takes place between 4pm to 5pm. They get a couple’s shoot at about 5pm as animals are lurking in the background in the golden light of the setting sun. A majority also want wildlife pictures, so we go on a game drive the next morning, and they have hundreds of photos to take back home,” says Mr Shah, adding that safari weddings in Kenya are unique in this way as there are only a handful of places in the world where this dream can be realised.