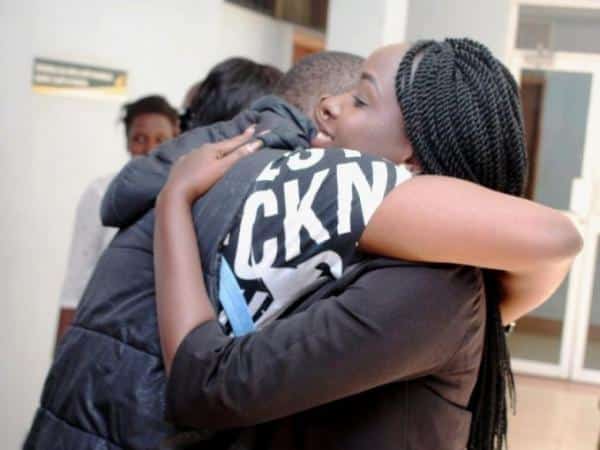 Citizen TV journalist Jacque Maribe and Joseph Irungu for the first time on Tuesday embraced each other at the Milimani Law Courts.

The two are facing murder charges in the case of business lady Monica Kimani.

They have both denied the charges.

Since the beginning of their case, the two did not see eye to eye as they could be seen sitting at the dock but not talking to one another.

But today, things were different making photographers shine with the picture of the two hugging each other tightly at the court.

Maribe who had her birthday today had gone for the mention of the case.

While at the dock, the two embraced tightly as cameramen scrambled for pictures.

They also exchanged pleasantries before Jowie hugged Maribe’s mother, who was standing nearby.

After her mentioning at the court, Maribe’s father gave her a birthday cake outside the courtroom.

“After attending court… Time to remember it’s her birthday. Right there at the Law Courts,” her father wrote on his Facebook post.

Earlier, the prosecution said Maribe will not get her car yet because it is an exhibit in the matter.

The Prosecution informed the court that government chemist is not done analyzing the car due to lack of some reagents and once the analysis is completed and the vehicle can be handed over to her.