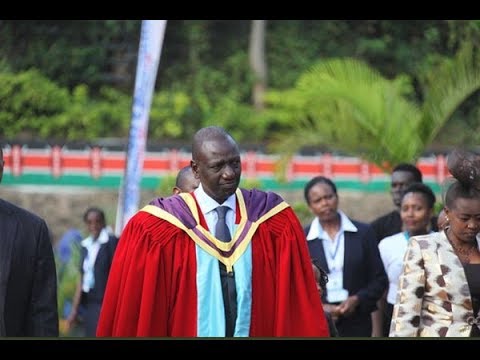 The Deputy President William Ruto will today obtain the title ‘Dr’ as he graduates from the University of Nairobi with a doctorate, after six years of study.

His name, alongside six other UoN doctorate graduates, was approved and published by the university Senate last month.

Mr Ruto has been pursuing the doctorate, the highest degree awarded by a university, since August 2012.

He will graduate with a PhD in plant ecology. The title of his thesis is ‘Influence of human activities on land use changes on environmental quality of riparian ecosystems: A case study of Saiwa Swamp watershed, Western Kenya’.

Mr Ruto’s project was approved in August 2012 and he submitted the thesis in September.

His graduation was approved in a senate meeting chaired by Vice-Chancellor Peter Mbithi and attended by people including Julius Ogeng’o, the acting Deputy Vice-Chancellor of Academic Affairs.

Mr Ruto’s project was approved in August 2012 and he submitted the thesis in September. PHOTO | COURTESY

Mr Ruto has already published his work in two renowned journals as required by the Commission for University Education (CUE), the regulator.

These are the International Journal of Research in Environmental Science and the Asian Journal of Water, Environment and Pollution.

The 60th graduation ceremony is for students from the schools of health sciences, and humanities.

His graduation was approved in a senate meeting chaired by Vice-Chancellor Peter Mbithi. PHOTO | COURTESY

The deputy president is in the School of Biological Science.

In 2016, he failed to graduate because he had not met all the coursework requirements.

Why Elephants Are Important In Ecosystem Restoration