4 terror suspects on most-wanted list surrender to the police 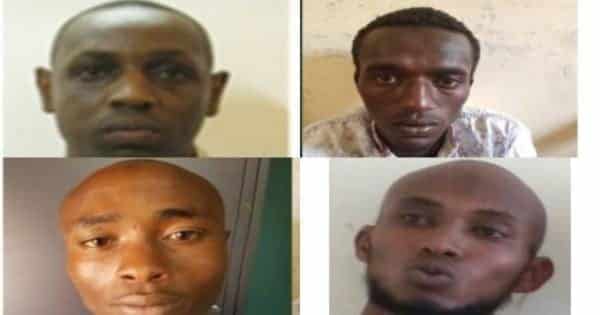 Three suspects in the list of most wanted terror suspects on Monday surrendered to police in Isiolo County, their parents claiming they were innocent and in danger.

They are Abdi Ali Kanchora, Boru Abdi Bidu and Ramadhan Wario Bonaya (alias Rasho). There had been reports of a fourth suspect’s surrender or arrest by police but Isiolo County Commissioner John Ondego said they were not aware.

Despite the surrender, the suspects’ parents said cases involving their children had been ongoing and that they had been cooperating with police, so they sought to know why their names were in the list.

The parents from Tulloroba in Isiolo took their complaint to the deputy county commissioner’s office following the release of the list by the National Police Service.

They said they were shocked when they saw their children’s names in the media on Sunday night yet they had been willing to take them to the Directorate of Criminal Investigations and the Anti-Terror Police Unit for interrogation.

Mr Abdi Bidu, father of Mr Bidu, explained that the three had attempted to cross over to Somalia in 2017 but were intercepted.

He said their cases were ongoing but that they had been freed on bond.

The parents said the suspects are now boda boda operators in Isiolo town and that they reformed and were giving information to the government.

Mr Hussein Wario, Mr Bonaya’s brother, asked the government to assure them of the security of the three. He said his brother was arrested while watching a soccer match in a hall in Isiolo town three years ago.

Mr Bonaya and the others have been reporting to the ATPU as directed, he added.

“Officers from the ATPU knew the suspects but were not aware of the list,” he said.

Ms Halima Boru said her son, Mr Kanchora, had been selling second hand clothes when he was arrested three years ago.

The Isiolo Parents Association, whose chairman accompanied the parents to the deputy county commissioner’s office, questioned the government’s motive in releasing the list as the cases had not been concluded.

Police have made several arrests following the January 15 attack by Al-Shabaab terrorists on the dusitD2 office complex on 14 Riverside Drive in Nairobi.

They are searching for the accomplices of Ali Salim Gichunge alias Farouk, from Isiolo, who was involved in the ambush.

On Sunday, the police service released photos of nine people wanted over the terror attack.

Among them is Violet Kemunto Omwoyo (alias Khadija), who is believed to be the wife of Mr Gichunge, one of the attackers killed by commandos in the incident during which 21 people died.

The others are Didu Mohamed Fugicha, Gaddafi (alias Munene), a man only identified as Omari, and Hussein Adan Hussein alias Etto.