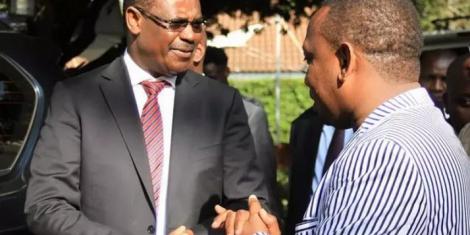 Speaking at the office of Mombasa Governor Hassan Joho, Sonko also extended the Olive Branch to his competitor in the 2017 election Peter Kenneth.

He urged the two politicians to join hands with him and come up with a united team to help his administration transform Nairobi City County.

“As in have been appealing. I’m ready to work with all leaders in Nairobi County especially those who competed with me for the Governor’s seat. In the spirit of the handshake between President Uhuru Kenyatta and former Prime Minister Raila Odinga, I’m ready to work with my opponents for the good of Nairobi people,” he conveyed.

Uhuru and Ruto mourns the death of Isaac Ruto’s daughter,Emily

Club Management: Waiter Lied About Being Slapped by Churchill

NO Crisis In Jubilee And No Parliamentary Group Meeting-Tuju