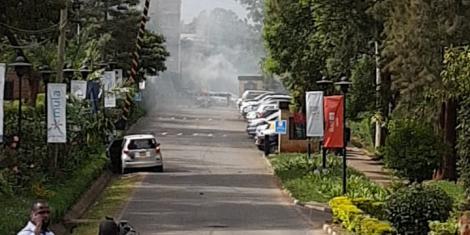 Reports reaching Kenyans.co.ke are that there was a loud bang in Westlands that was followed by sporadic shooting.

The incident took place at 14 Riverside Drive at the building housing Dusit 2 Hotel and police officers are responding to the calls for help.

People hiding inside the buildings are reporting incessant shooting with many taking to social media to say they are holed up in several of the adjacent buildings.

Police Spokesman Owino has told journalists that the area has been cordoned off.

This is the car that was allegedly used by Riverside attackers

Witness recounts events before and during the Riverside Attack

Celibacy: The Kenyan Catholic Bishop Married To A Nun