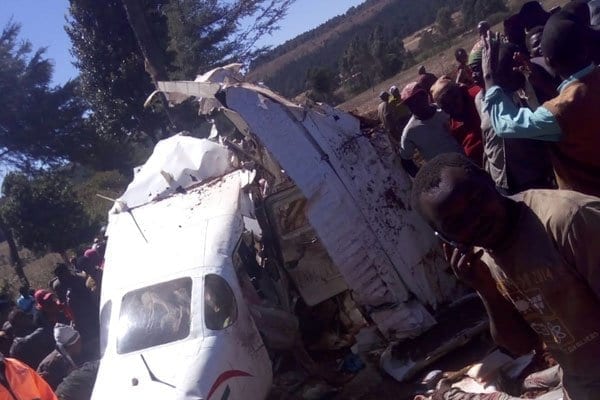 A light aircraft has crashed near Makutano Forest in Londiani, Kericho County, killing all the five passengers on board.

National Police Airwing Commander Rodgers Mbithi on Wednesday confirmed to the Nation that all the five occupants of the Cesna 206-5-Y BSE had perished.

They include three men and two women, four of whom are whites.

Their nationalities are yet to be established.

The wreck of the ill-fated plane that crashed in Londiani on February 13, 2019. PHOTO | COURTESY

The plane was ferrying the passengers from Ol Kiombo in the Mara to Lodwar in Turkana County.

The craft crashed in Masaita Forest View Village and landed on a farm a few minutes after 11am.

Villagers mill near the wreck of the ill-fated plane that crashed in Londiani on February 13, 2019. PHOTO | COURTESYLondiani plane crash

The cause of the crash was not immediately established and investigators have started investigations.