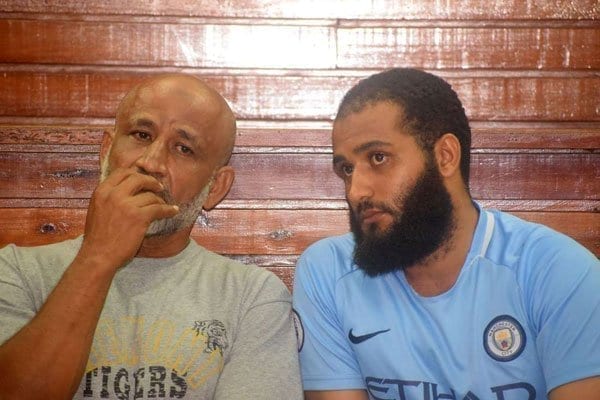 A man and his son, accused of hosting slain Al-Qaeda terrorist Fazul Abdullah who was linked to Nairobi US embassy bombing of 1998, have been found guilty of three terrorism-related charges.

Mahfudh Ashur Hemed and his son Ibrahim Mahfudh Ashur were on Tuesday found guilty of being accessories after the fact by harbouring and maintaining Mr Abdullah.

It was said that they did so to enable him escape punishment after the 1998 and 2002 terrorist attacks in Nairobi and Kikambala.

Embu Chief Magistrate Maxwell Gicheru convicted the two of harbouring the terrorist, who was unlawfully in the country, on unknown dates between December 2007 and August 2, 2008 at Silversand Estate, Malindi.

Mr Gicheru said he did not believe the accused did not know Mr Abdullah or that he was a terrorist wanted for the US Embassy and Paradise Hotel attacks as they had Friday bulletins with his picture and stories on the incidents.

“The bulletins are clear proof that the accused were closely monitoring terrorism issues in the world and in Kenya in particular,” he said in a judgment read by Mombasa Chief Magistrate Evans Makori.

The magistrate further noted that the DNA sampling that was conducted was lawful and in accordance with the Penal Code.

“As for the DNA in Ethiopia in respect of the children of Fazul and his remains, I find that it was lawful because it was authorised by the governments of the two countries,” said Mr Gicheru.

The magistrate also said he believed prosecution witnesses who said a flash disc, a shaver, Friday Bulletins and a passport were found in the accused’s house.

“The police officers who were involved in the recovery of the items did not know the accused before August 8 2008. They arrested the second accused at 9pm and the first accused shortly thereafter,” said Mr Gicheru.

The magistrate pointed out that there was no time for police officers to plant any of the items recovered as many of them were involved and acted spontaneously so they could not have had time to plan anything.

Mr Gicheru also said there was no reason why all Anti-Terrorism Police Unit officers from Malindi and Mombasa would descend on the home of an ordinary family and accuse them of hiding the most wanted terrorist in the region.

“I am convinced that the police officers acted on intelligence information which led them to the discovery and that they had no malice or reason to implicate innocent people.”

Regarding materials recovered from the Friday bulletins, 912 pages in the flash disc, the shaver and passport, Mr Gicheru said they proved conclusively that Mr Abdullah was at the home of the accused.

“The DNA generated from the shaver when compared to the ones recovered in Ethiopia and Somalia proves beyond doubt that Fazul had been to the home of the accused,” said the magistrate.

Mr Gicheru further said that the accused, though with no burden of proof, were expected to explain how all the suspect material came to their possession but that they did not, after denying that this was the case.

The prosecution is expected to make its submissions on sentencing on Tuesday afternoon before mitigation by the accused.

Letter To Uhuru: Intervene To Prevent Eruption Of Menengai Crater In Nakuru

Wife-beating a source of pride, love for some in Mauritania