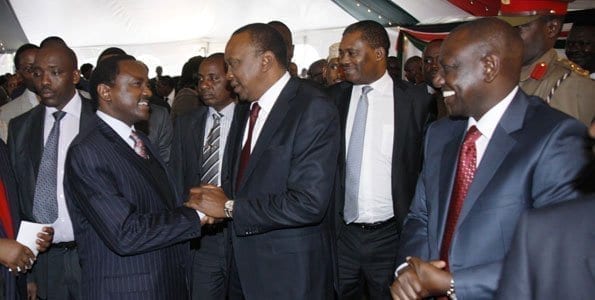 An official of the Orange Democratic Movement (ODM) has taken a swipe at Deputy President William Ruto for his remarks about party leader Raila Odinga during Thursday’s National Prayer Breakfast.

Secretary-General Edwin Sifuna criticised the DP for “turning a solemn occasion of prayer into another platform to take another swipe at Raila”.

At the meeting that took place at Safari Park hotel in Nairobi, Lord Michael Hastings, a member of UK’s Upper House, wondered whether Kenya could spare one of its leaders to take up the British prime minister job.

“We are just wondering if you have a spare prime minister around,” Dr Hastings said, causing laughter.

After the request, the DP had an answer for him.

He said, “We have a retired one in Kenya and since the Constitution has abolished that position in Kenya, and he may not have it anytime soon, we will send you his CV, maybe you can consider him.”

Mr Sifuna said he was not amused when the DP purported to help find a job for the former premier as millions of youths are grappling with unemployment yet the Jubilee government promised them jobs.

He said Mr Odinga has neither asked for, nor needs Dr Ruto’s help to find a job and that it is not lost on him that it was Mr Odinga who gave Dr Ruto a job as a minister in the Grand Coalition Government.

“This is laughable because we all know who has capacity to find employment for the other,” Mr Sifuna said.

“Our young people require jobs, even as the DP obsesses with offering Mr Odinga jobs at every turn. We shall soon be calling all the unemployed youth in this country to bring their CVs, march to the DPs office and dump them there so he can find them jobs, as that should be his focus.”

Mr Odinga did not attend the meeting as he travelled to Addis Ababa, Ethiopia, for a conference on the integration of the Belt and Road Initiative and development strategies for African countries.

Mr Sifuna further termed Dr Ruto’s assertions at the occasion as disparaging and a personal onslaught on Mr Odinga.

He accused the DP of turning the event into a “spectacle of insincerity and hypocrisy”, adding that his remarks raised questions about the genuineness of the annual spectacle and the sincerity of Kenyan leaders.

He noted that at the 2018 breakfast, Kenya’s top leaders promised to bury the culture of divisive politics and chart a new path for the country.

The ODM official further accused Dr Ruto of dragging the country back to politics of intrigues, personalised attacks and insults, and sustaining a “petty, juvenile and ill-informed onslaught”.

“We wish to make it clear that we are not prepared for empty sloganeering and promises of unity that do not translate into tangible results among the people,” he told a press conference at Orange House in Nairobi.

He told the DP to turn his focus from criticising Mr Odinga to salvaging his “dwindling political fortunes, seeing as the country has read through his political blackmail and will no longer take his lies”.

“There are many more problems this country has that cry for solutions, among them corruption, land grabbing, political blackmail and constant threats of violence, all of which the DP’s imprimatur is almost always present,” he said.

Meanwhile, the Senate’s Senate County Public Accounts and Investments Committee Chairman, Moses Kajwang’, has accused some of the leaders who attended the prayer breakfast of insincerity.

Mr Kajwang’ (Homa Bay) said on Thursday that the leaders used the event to “wash their sins” of corruption.

“Some leaders are using the prayer meeting to show themselves as God-fearing but at the back of their minds, they know that isn’t true,” he said.

Speaking at Alero beach in Suba North, the senator expressed concern that Kenya will run into more debt if the vice is not dealt with.

“Kenya is almost bankrupt because of debts. Some of the problems the country is facing [were brought on] by corrupt leaders,” he said.

Mr Kajwang’ said he skipped the event because of the “rampant corruption” in the country. He added that until graft cases are reduced or completely neutralised, he will skip all meetings of this nature.

Leaders including President Uhuru Kenyatta attend the meeting to pray for the country.

Which One Makes More Sense?-An Undergraduate Or Graduate Degree In USA?

SAUMU SONKO: I’M UNDER PRESSURE TO VIE FOR MCA SEAT