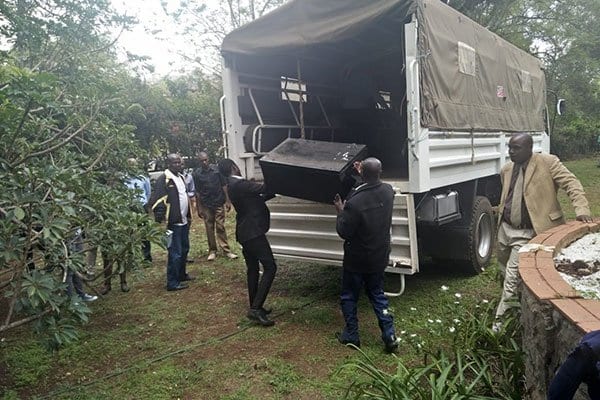 The National Police Service has come out to clear the air regarding the presence of General Service Unit (GSU) personnel during a raid at a house that had fake gold in Kileleshwa area.

Through a tweet, police spokesman Charles Owino rubbished rumours that the officers were protecting the suspects, noting they were at the scene to guard members of Diplomatic Corps.​

“The National Police Service wishes to inform the general public that General Service Unit (GSU) officers spotted at Kaputei Gardens where a raid on fake Gold had earlier been conducted, were actually guarding members of Diplomatic corps residing within the court and not the suspects,” read the statement.

The consignment bearing Ghanian custom papers was stuffed in metallic boxes and their weight had been altered using cement and mallets.

Eight vehicles belonging to the suspects bearing fake number plates were also seized during the raid.

The officers said the raid was part of a larger operation that is ongoing on the fraudsters operating in the country.

This followed numerous complaints that had been registered with the DCI with many foreigners being conned.

The operation was triggered by a complaint by members of Dubai royal family that was defrauded close to Sh400 million by some of the players in the syndicate.

“The gold scam has now reached alarming levels as unsuspecting foreign nationals are being swindled large amounts of money by fraudsters,” he said.

Kinoti said Kenyans and foreign nationals must ensure that they conduct proper due diligence on the person(s) they intend to engage in the gold buying business.