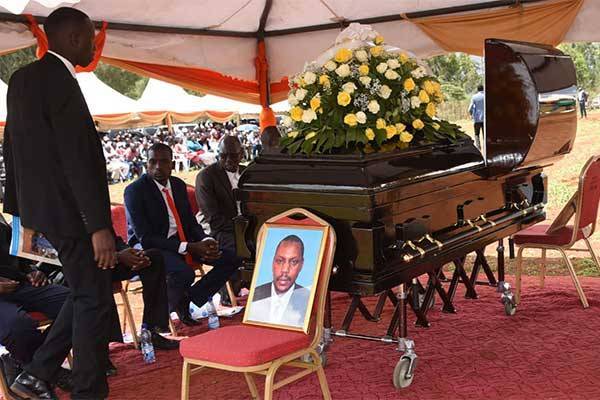 According to a police report, the six were found ‘behaving suspiciously’ at John Kinyor’s grave at around 3 am on Monday.

They were arraigned in court on Monday.

Statements by the prosecution officer, Patric Lorim, indicate the six were arrested for trespassing at odd hours.

Eldoret Chief Magistrate Charles Obulutsa ordered the suspects to be detained at Soy Police station for five days to allow the police to carry out more investigation.

The case will be mentioned on June 7.

Kinyor, whose lifeless body was found in an incomplete building at Chepkanga market, was buried on Sunday.

He was an employee of Kenya Pipeline Eldoret department and had been recently transferred to Eldoret from Kisumu.

Last week, Eldoret East CID boss Ali Kingi said a review of  CCTV footage showed the deceased slipped from stairs on the first floor and fell into an area in which a lift was to be installed.

Initial reports indicated that Kinyor might have been murdered elsewhere and his body dumped in the area.

Gone Too Soon: Promotion to glory for Francis Irungu of Oklahoma City

Moi’s granddaughter hits out at DP Ruto over Kabarak snub