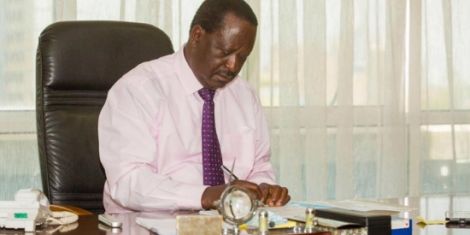 David Mokenye Onyuoki: Former Prime Minister Raila Odinga has made a new addition to his secretariat.

Odinga welcome David Mokenye Onyuoki from Duke University who will be based in his office.

Mukonye had made a request to serve the ODM Party Leader during the former premier’s lecture tour to the institution on October 2018.

“Glad to welcome David Mokenye Onyuoki, a Political Science student at Duke University who will be undertaking his internship in my office following a request he made last October during my lecture tour to the institution,” read Odinga’s post on Facebook.

Despite his young age, David has a very impressive profile and boasts run-ins with Prince Edward among other international dignitaries.

Prior to joining Duke University, he took Civil Engineering at the University of Nairobi.

He is also a Gold Award holder of the President’s Award Programme.

In 2016, he was invited to speak at The Duke of Edinburgh’s International Award Special Projects Dinner in London.

The event was hosted by Theatre Royal Haymarket (TRH) and The Earl and Countess of Wessex KG GVCO.

He spoke movingly about the transformative impact of the Award on him: “the boy I was then would be proud of the man I am now. Indeed, the discipline, focus and leadership skills I gained as well as teamwork, social skills and the effort to keep physically fit are more than invaluable.

“I may not have much, but I choose to give the little I have, and the result is a sense of fulfillment which I cannot adequately express; some sort of self-actualization.”

He attended Nyeri High School and was among a group of students who were teaching inmates at King’ong’o Maximum Security Prison.