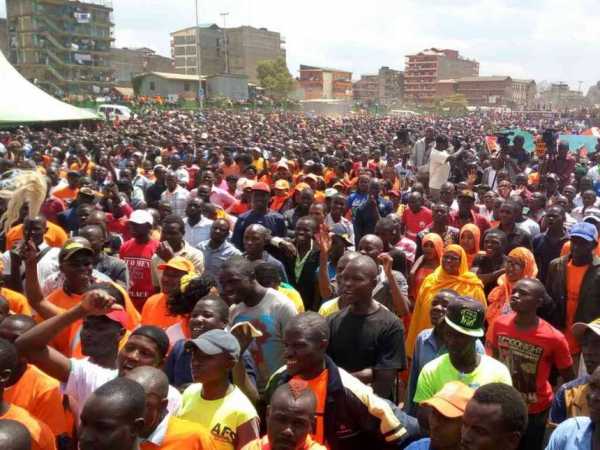 They bashed the Jubilee administration over the high cost of living and for failing to fulfill its 2013 pre-election promises.

Led by Mombasa governor Hassan Joho and his Nairobi counterpart Evans Kidero, they reassured Raila that they will not defect to the newly launched Jubilee party.

Joho also hinted that he will vie for the presidency in 2022, and warned DP William Ruto to prepare for a stiff face off.

“I want to tell Ruto that Raila Odinga is not in your league. We want to ensure Raila goes to Statehouse in 2017 and come 2022 I meet Ruto one on one,” Joho said.

Why Uhuru Kenyatta has turned into an angry, irritable…

They were addressing their supporters at the Masinde Muliro Gardens in Mathare on Sunday.

The Jubilee team was, on the other hand, holding its rally at Mlango Kubwa after it changed its earlier plans to hold a parallel rally at the Muliro grounds in Mathare.

Nairobi Governor aspirant Bishop Margaret Wanjiru took a swipe at the incumbent Evans Kidero by saying he had developed jitters over his deteriorating popularity within the city, and is now seeking help from Joho.

“Kidero shame on you. You are a sitting governor and you can not mobilise supporters for a rally yet I have gathered all these people without being in any office,” Wanjiru.

On his part, Kidero told off Water CS Eugene Wamalwa, saying he is an outsider who does not understand city politics and the problems facing residents.

He threatened to sue the national government for failing to clear its bills amounting to billions of shillings.
“The national government owes my government Sh69 billion in parking and license fees among others. We have gone to court but it has failed to pay. I have instructed my lawyers to return to court,” he said.
The more than 10 ODM legislators lashed out at Mathare MP Steven Kariuki for ditching the party and joining Jubilee after he bagged the constituency seat.
Kidero demanded Kariuki to refund the Sh20 million ODM contributed for his campaigns in 2014. 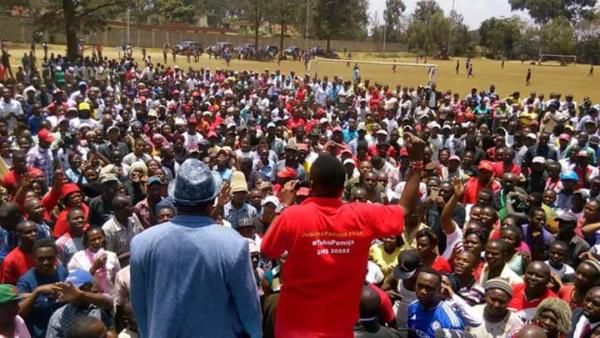