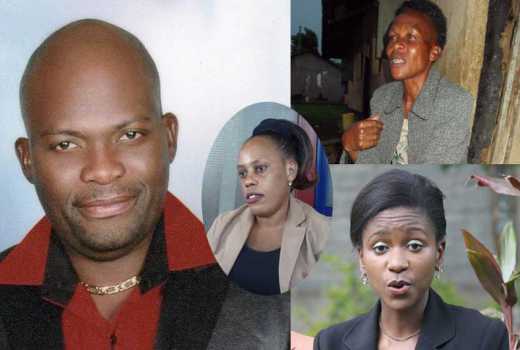 As reports of former KTN anchor, Esther Runga, lying to police over her son’s death, continue to spark mixed reactions, Quincy Timberlake’s ex-wife has weighed on the issue.

Esther, a lawyer by training, on Monday, pleaded guilty to being an accessory to the murder of her four-year-old son Sinclair Timberlake on the night of June 17, 2014.

Esther admitted that she found her husband, Timberlake, hitting their son on the stomach adding that he “threw him against the wall” saying “there’s a devil in his stomach, I have to get it out”.

Timberlake was charged with murder and is currently in jail.

Speaking to a local media, Rose Mueni said the two are in her prayers.

According to Mueni, nobody is perfect and the two are not different.

“With God all things are possible. We’re not judging you as a family and we’re praying for you despite our differences. We’ve always prayed for him and his family because him not being in our lives, doesn’t mean he’s an enemy. Be strong, this shall come to pass,” she told The Star on phone.

“I love him with the love of Christ Jesus,” she said.

She urged Esther to be strong during this most challenging moment in her life and family.

“No one is a saint. We all make mistakes at one point. But once we make our mistakes or fall, we stand up just ourselves and move on. She might have made a mistake and I think she has learnt from that mistake. She’s not going to stay where she is forever. I believe she has moved on and learnt from her mistakes, ” she added.

Mueni, who has three children with Timberlake, told Arunga not to be shaken by the negative reactions, as people will always talk.

In a message directed to Timberlake’s family, Mueni urged them not to give up on their daughter, Esther.

She appealed to Kenyans to stop on-going trolls and instead embrace her.

“Forgive her, embrace and accept her. She made a mistake and yes, there’s a time for everything. This is not time to judge her and criticize her. Give her another chance to live. We’re human beings and bound to make mistakes. No one is perfect,” Mueni appealed to Kenyans.

Esther is set for sentencing on Thursday by an Australian court.