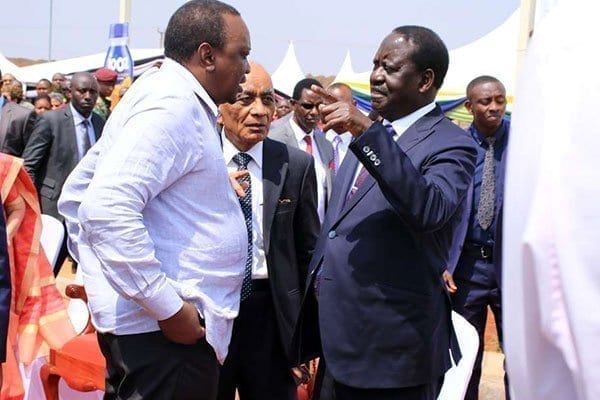 Inside Uhuru’s new kitchen cabinet: Team running show: As he navigates the last stretch of his second and final term, President Uhuru Kenyatta has entrusted a close circle of confidants to run the show for him as he seeks to ensure that he establishes a formidable legacy.

Mr Kenyatta has had a difficult presidency — partly because he had to implement an expensive top-heavy devolved system of government where sleaze, weak structures and egoistic battles became the hallmark of the new structure.

With time running out for him, the President is now relying on a small team of his kitchen cabinet to steady the boat as he navigates towards the trickiest part — the Building Bridges Initiative (BBI) report, which is a make-or-break for him and his foe-turned-political friend, Raila Odinga.

With the handshake and the BBI rising up the ranks of his to-do-list, the Head of State has also set up a team that would keenly study its report and ensure its successful execution.

The handshake not only stopped the escalating election-related violence and political divisions linked to the troublesome 2017 polls, but also changed the succession politics.

The BBI team, chaired by Garissa Senator Yusuf Haji, is due to release its report soon after its working period expired last Wednesday.

The President rates the BBI and the handshake highly, going by his public posture.

With the Big Four Agenda also at risk of failure because of the 2022 politicking and Kenya’s debt crisis — the President has set up a team, considered apolitical, to ensure the agenda is on track and realised before he exits in three years’ time.

During his first term, the President appeared to have lent the running of government to his deputy, Mr William Ruto. He now appears to lean more towards Mr Odinga.

By managing to wrestle the mantle from the DP, Mr Kenyatta has planted other individuals he trusts at prime positions and his inner circle has thinned to just a handful of people. The top players in this team are:

Dr Matiang’i has had a meteoric rise within the Jubilee government and is at the moment one of the most powerful insiders.

A man who made his name at the Ministry of Education where he took on the examination cartels, Dr Matiang’i is now entrusted with running the administrative state and enjoys the President’s total backing.

In Executive Order No 1 of 2019, issued on Monday, January 21, the President gave Dr Matiang’i the super role of providing “supervisory leadership throughout the delivery cycle of all national government programmes and projects” which in effect whittled down the role played previously by the DP.

ODM leader Raila Odinga. He has grown to be one of the most trusted political confidants of Mr Kenyatta. PHOTO | KEVIN ODIT | NATION MEDIA GROUP

Ever since he entered into a political truce with Mr Kenyatta, Mr Odinga now enjoys the trappings of power and is a driving force of the BBI — which is to shape the post-Kenyatta II presidency.

For that, Mr Odinga has grown to be one of the most trusted political confidants of Mr Kenyatta and their body chemistry says as much.

Although Mr Odinga holds no position within the government, he regularly goes on government missions and occasionally visits government projects.

His public pronouncements on government policy have left no doubt about his status within the inner circle.

Insiders say that President Kenyatta has turned to Dr Kibicho to manage the government and the politics. This is because he is believable, a workaholic and has become a trusted figure.

Behind the scenes, Dr Kibicho has emerged as a super principal secretary and today chairs the powerful National Development Implementation Technical Committee, which President Kenyatta formed through Executive Order Number 1 of 2019.

His position now mimics the Moi-era Chief Secretary, once held, albeit briefly, by Simeon Nyachae. By being directly in charge of Regional Administration and other security apparatus, Dr Kibicho is at the heart of the President’s state.

Like Dr Matiang’i, he is a powerful Jubilee technocrat.

Former Nakuru governor Kinuthia Mbugua. He is a crucial gatekeeper and adviser to the President. PHOTO | FILE | NATION MEDIA GROUP

A former Nakuru governor and Administration Police commandant, Mr Mbugua is the diary keeper and, by virtue of his position, becomes a crucial gatekeeper and adviser to the President.

As a former provincial administrator, Mr Mbugua knows the inner-workings of the administrative state. His entry into State House, during Mr Kenyatta’s second term, saw the reconfiguration of State House by bringing discipline into the ranks.

Initially, he had trained as a cadet before entering the public service.

A political strategist par excellence, Ms Gitau is known for her organisational keys and was a key element during the Jubilee campaigns.

Initially based at State House and the Office of the President, Ms Gitau had quietly left but insiders say that she is still one of the few people — outside the government — who are normally consulted. She still runs the political affairs of Mr Kenyatta despite her shadowy input.

At the moment, she is said to be closely involved in Mr Kenyatta’s 2022 political decisions and plans.

Just before the 2017 elections, Gen Mwathethe surprised the political clique when he asked politicians to desist from divisive talk.

It was the first time that a man of that rank was adding his voice at a charged political period.

He warned that Kenya should not be turned into a war zone like Iraq.

That this man has won the admiration of President Kenyatta is now known, and the President hardly misses the military events.

With Kenya deeply involved in a regional peace enforcement in Somalia, Gen Mwathethe has turned to be a key figure within State House.

He is the Country’s Director General of the National Intelligence Service (NIS) with unfettered access to the Head of State.

He is key in delivering intelligence briefs to President Kenyatta and is said to be trusted by the Head of State, following the renewal of his term in August.

On matters security, President Kenyatta is said to rely on his briefs together with Interior CS Fred Matiang’i and PS Karanja Kibicho.

He boasts of vast experience on intelligence service having served as the head of military intelligence before his appointment as the Country’s spy chief in 2014.

Chief of Staff and Head of Civil Service Joseph Kinyua. At 67, Mr Kinyua is one of the oldest public servants inside State House. PHOTO | FILE | NATION MEDIA GROUP

When he was named into this position in 2013, Mr Kinyua had come from the National Treasury where he had made a mark.

At 67, Mr Kinyua is one of the oldest public servants inside State House and one of the longest-serving within the government.

The President appears to trust his wisdom and attention to detail.

But more than that, Mr Kinyua, unlike other public servants, is both incorruptible and a workaholic.