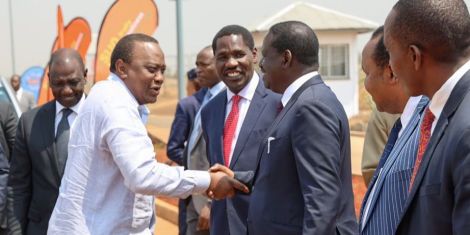 Taking to social media on Monday, October 7, Wambugu stated that Ruto rode on President Kenyatta’s wave to become deputy president after they partnered in 2013.

He recalled that Mount Kenya received Ruto with open arms, despite having been in the opposition for a long time, adding that the same overture would be given to Odinga if endorsed by Kenyatta.

” Mt Kenya bought William Ruto less than five years after he was associated with heinous crimes against Mt Kenya people. I laugh when I hear some people say that it will be hard to sale Odinga in Mt Kenya.

“Ruto was sold to us by Uhuru Kenyatta, and we bought him. 100 per cent. Today we are fighting over Ruto,” Wambugu opined in reference to the divisions in Central Kenya.

Wambugu laughed off allegations that Kieleweke, a faction within Jubilee allied to Kenyatta, was selling Odinga in Mt Kenya.

“Kieleweke is not selling Raila in Mt Kenya. We cannot do that.

“It is about ensuring Uhuru gets the space and time he requires to complete his term and deliver his legacy. Period!” Wambugu declared.

Wambugu pointed out that Kenyatta was the deciding factor in the 2022 presidential race between Ruto and Odinga.

“So the man to watch is Kenyatta. If he decides to sell Raila to us, we will buy him,100 per cent. Let us remember that he sold Ruto to us when he wasn’t the president. Now he’s the president,” the legislator noted.

“Volume iko sawa? So watu wacheze chini. Mambo ground iko different sana. (Am I clear enough? Let everyone keep calm as the situation on the ground is different,” Wambugu argued.

Gatundu South MP Moses Kuria, on the night of Sunday, October 6, shed light on the apparent shifting of allegiances by leaders drawn from the Mt Kenya region. Like his Nyeri Town counterpart, he also argued that Mt Kenya had accepted Ruto after Kenyatta sold him to the region.

During a sit-down with show-host Anne Kiguta on K24 TV’s Punchline, the vocal politician, however, claimed that most of the leaders were increasingly siding with DP William Ruto and not President Kenyatta.

This, he continued, was because many people found the Rift Valley politician more accessible than the president despite him hailing from the region.